The weather was good again. There was a light breeze from the south west. It was sunny and clear and the wind still had some chill in it. The last few sessions, fishing at Brooms Head in Northern New South Wales had suggested light tackle was probably the best option. I decided to fish the drain at the western side of the Brooms Head lagoon. The lagoon sits just north west of the main Bluff and is deepest by the rock ridge at its mouth, to the east. As the tide rises and falls, the water enters and exits close to the beach via a big sandy drain. The drain never fills to more than about waist deep. If you walk across it your reach rocky/ weedy covered bottom that forms the north wall of the lagoon. Further north, where this wall drops off to a sandy bottom is a great fish holding area. They sit here waiting for food to be washed in and out of the lagoon on the rising and falling tides. The area is highlighted in the aerial photo.

I was using the Gary Howard 9’ Estuary rod again. I had loaded a very light 1/16th oz 1 hook jighead. I wanted to avoid getting snagged on the rocky weedy bottom. I used about 1.5 m of 10lb breaking strain fluorocarbon leader. I used the soft plastic lure that had been successful the day before – the GULP 3” Minnow in the Pearl Watermelon colour. I waded out into the water, which was surprisingly warm. I put in long casts out over the rocks to the sandy areas to the north. Every time I lifted the lure over the edge of the rocks there would be a small bite or nudge from a fish. The tide was running in and had been low at about 5.30 am. The incoming tide had also produced the fish the day before.

After a bit of wading around up and down the rocky bottom I was onto a fish. It was a good Bream around 30 cm long. I cast back out in the same spot, and the plastic was slammed as soon as it hit the water. The fish pulled hard and took a bit of line. It felt much stronger than the Bream. It kept turning to run as I waded back into the beach, to land it. I saw the stripes in the water and realized it was a small Trevally. It really had pulled hard on the light rod. I released it and headed back out. It was about 8.30 am and the tide was running in strongly. 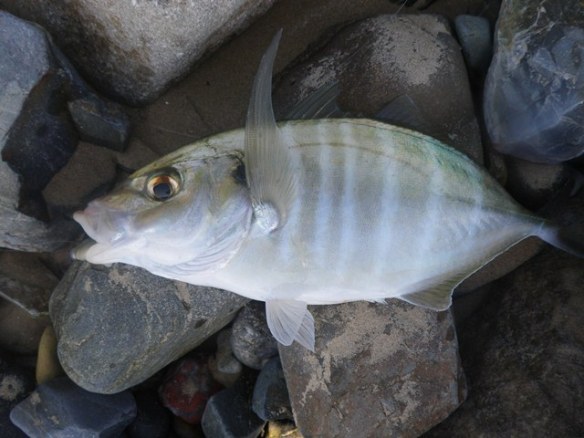 Over the next hour I caught two more small Bream, a Tarwhine, three more Trevally and a couple of Pike. The cold southerly breeze eventually made me too cold to carry on but I was delighted to find a few fish. At around 9.45 am I went back to our cabin for a hot shower. Fishing with lighter gear had paid off.