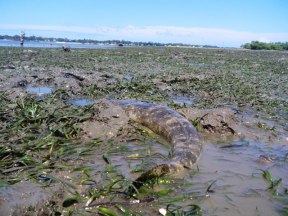 Wednesday
I started fishing at about 9.15 am – not ideal, but sometimes life gets in the way of my true calling. It was a fantastic Queensland day with bright sunshine and light breeze from the North West. I was at my usual haunt – Bribie Island. I headed up to Whitepatch where I had caught a few fish on Sunday. The tide was about half way out with low tide forecast for around 12.45pm.
I rigged up with a very light 1/32 oz jig head and put on a Gulp Sandworm in the Camo colour. I was trying for a few whiting. There were plenty around – I suspect their favourite food is the soldier crabs that come out on to the flats, in huge numbers, at low tide.
I caught a couple of very small Whiting and then decided to look for something bigger. There was plenty of bait in the water – whiting, garfish etc. I upgraded to a 1/6th 1/0 jighead and put on a GULP 2” Shrimp in the Peppered prawn colour. I walked up and down the ledge that runs all along this section of the Passage and cast alternately; one over the edge and one out in front of me, into the shallow water on top of the ledge. I did this for well over an hour without success. At one point a hungry Pike made a great lunge at the lure just as I lifted it out of the water, but I did not get it.
At this stage I think it is fair to point out that I usually find November, December, January and February by far the toughest months to fish the Queensland estuaries from the shore. If I look back through my diaries there is a dramatic drop off in my catch rate after the Flathead finish spawning and the water warms up. However, summer brings the possibility of rarer, but exciting species such as Mangrove Jack and Sweetlip and even the occasional pelagic, like Tuna or Mackerel. It is a different style of fishing and requires a bit more work. You have to find them and this means lots of long casts and long walks/ wades.
I decided to switch spots and drove over to the mainland side of the Bribie Island Bridge. I waded out onto the muddy weed banks just to the south of the old oyster jetty. By now these were only covered with about 60cm of water. I put on the Gulp 3” Minnow in the Pearl Watermelon colour – I stuck with the 1/6th 1/0 weight jighead. I was aiming at the sandy patches in between the weed and the edge of the rubble piles that dot the area. There was a bit of weed floating around but not enough to make the fishing difficult. About 40 metres to the south of the jetty I cast into a piece of clear sandy bottom and just as the plastic hit the edge of the weed, I felt a dull thud. Finally, after three hours of fishing I was on to a reasonable fish. I gave it plenty of line and gradually towed it back to the shore to unhook. It was too valuable to try to risk grabbing while wading around in the water. When I got it up and away from the water it was a respectable 46cm Flathead. It was now right on low tide and after a few more casts to see if the fish had any friends around, I gave up.
The fishing is getting harder but the harder they are to find, the sweeter they taste!