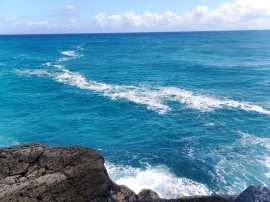 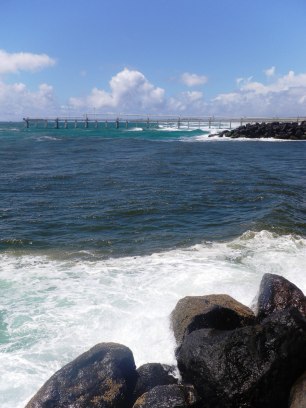 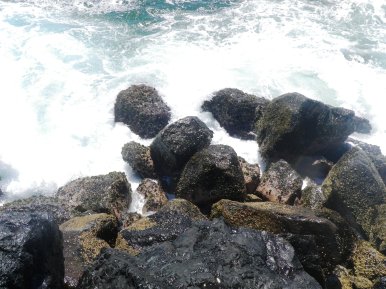 I had seen a few recent reports of anglers catching good fish off the Tweed River mouth rockwall. I have always loved fishing this spot, so on Tuesday I decided to give it a try. The problem with the Queensland summer is that early starts need to be really early. To be at the Tweed for the best fishing, you really need to arrive just before dawn. That means a 3.00 am departure from Brisbane at this time of the year.
The Tweed River (like just about all the rivers in Queensland and New South Wales at the moment) is in flood. It’s brown and murky, like the colour of strongly brewed tea. Theoretically, the most likely time to get fish around the mouth is the end of the run in tide, when the water will be at its clearest and saltiest. However, fish hang around the mouth all the time in these conditions, as the surge of fresh water washes down all sorts of potential food for them. There is often a clear line on the surface were the brown river water mixes with the clearer blue/ green ocean. This is usually my target area.
The rockwall on the north side of the Tweed is easily accessible and has a number of rock ledges that make for great casting platforms. I walked out to the end of the wall at around 4.30 am. Unfortunately I had missed dawn, but I rigged up as quickly as I could and got started. I have caught fish here on soft plastics, metal and hard-bodied lures, but at this time of the year I prefer to use slugs and surface poppers. The surface poppers seem to work best for me, just before dawn, in the half light. I believe it is the combination of slightly lower light and hungry, feeding fish that makes them successful. I have caught plenty of Tailor and Trevally at this time, in this spot.
As I had missed dawn I decided to fish lower in the water column and use a metal slug. I like to use the HALCO Twisties in the 85gm weight or the SPANYID Raiders/ Snipers in the 85/95gm weight, but just about any metal lure will catch fish here. I use my trusty 11Ft ROVEX Bario rod with a SHIMANO Stradic 6000 reel. For line I use 40lb PLATYPUS Bionic braid in the hi-vis pink colour and tie on a two metre, 25lb fluorocarbon leader. The knots need to be good and the reel needs to be carefully spooled. The long rod and relatively heavily weighted lures means you are putting a lot of pressure on the terminal tackle with every cast so, it needs to run smoothly.
I started with an 85gm HALCO Twisty in the chrome colour. I generally cast the slug about 30 to 40 metres, let it sink (count to ten) then wind it in very fast, keeping the rod tip down as close to the water surface as I can. The idea is to keep the lure sub-surface for as long as possible. If I believe the fish are in close, I may stop the retrieve twenty metres from the wall, allow it to sink back down and crank it up again.
I cast all around the end of the wall with no result. The tide was running out and it was around 8.30 am. I started putting in big casts, along the line were the dark water from the river meets the sea, directly off the end of the rockwall. About 25 metres out, half way through the retrieve – whack! The rod tip bends and line starts peeling. Initially the fish is running out to sea – ok, at least it is not heading for the base of the rocks. I look around for where to try to land it and conclude that I have to get it round to the side of the wall. The front is too rocky and there is still too much swell. I opt for the ocean side as this is a little more accessible. The fish has made a couple of solid runs but a couple of minutes into the fight it decides to head towards the wall. All the work I had done trying to get it round the corner is instantly undone, as it dives down towards the base of the rocks. The first surge of water lodges the leader firmly in the barnacles and on the next one – ping, the fish is gone.
I don’t know what it was. I doubt it was a Tailor as there was no mad shaking – my guess would have been a Trevally or possibly a Kingfish. I will never know. I carried on until my shoulders burned from the casting but I could not find another. At about 10.00 am I was drenched by an incoming shower and so I gave up. The fish definitely won today – perhaps I will try a forty pound leader next time!