With the wind forecast to kick up to a 15 knot south-westerly around 7.00 am on Tuesday, I had no real choice but to fish in the Pumicestone Passage again. When I arrived at Bribie at around 5.00 am the wind was nowhere near that level, so I decided to fish on the island side of the Passage. 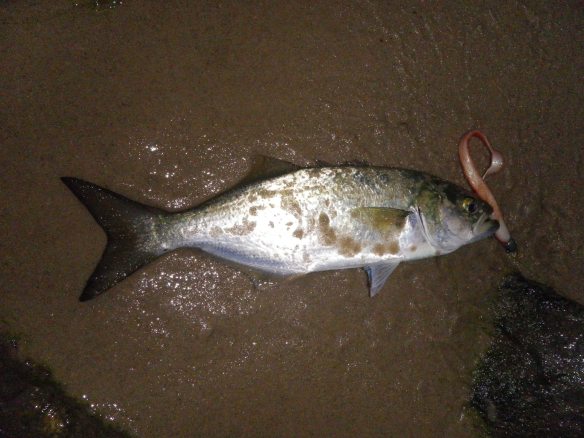 Low tide would be at about 7.30 am. I started under the bridge with a GULP 4” Turtleback worm in the BBQ Chicken colour on a 1/6th 2/0 jighead. As I waded, quietly in the shadows, there was no surface action and everything was very quiet. I realised why, when two dolphins popped up less than 5 metres away. They usually do a good job of eating or scaring the fish. They were wallowing around in less than a metre of water, they must have known I was there but it did not seem to put them off. A third one joined them and they headed over to the other side of the bridge. I moved to the south and caught a few Pike. After about twenty minutes I moved back north of the bridge and caught a few small Tailor. Then the dolphins came back again so I decided to move on.

It was now just after first light – about 6.15 am. I drove down to the car park beside the saltwater lagoon that sits just in front of Buckley’s Hole. This lagoon and the drain at its mouth, has been completely transformed by the wild weather of the last year or so. The mouth has gradually moved further north, towards the main Bribie Island Jetty. The drop off into the main channel of the Passage is only a few metres from the shore at low tide. I walked out of the car park and on to the sand.

I started by casting just over the drop off and walking along it, heading south. As the current slowed there was weed everywhere, this made things difficult. I was hoping for a few Bream, as they like to school up by this drop off, when they are spawning. Initially, all I caught were a few Pike.

I waded all the way down to the corner of Red Beach. On the way I landed a couple of Flounder and I kept the biggest of them. By now I was fishing with a GULP 4” Minnow in the Pearl Watermelon colour. I waded and cast for about 3 hours without much success. I walked back towards the car park and carried on north towards the Bribie Island main jetty.
I had now switched to a GULP 3” Minnow in the Peppered Prawn colour. I had also swapped to a lighter jighead – a 1/8th 1 hook. I was using 10lb leader. About 100 metres short of the jetty I caught a small bream – around 27cm. 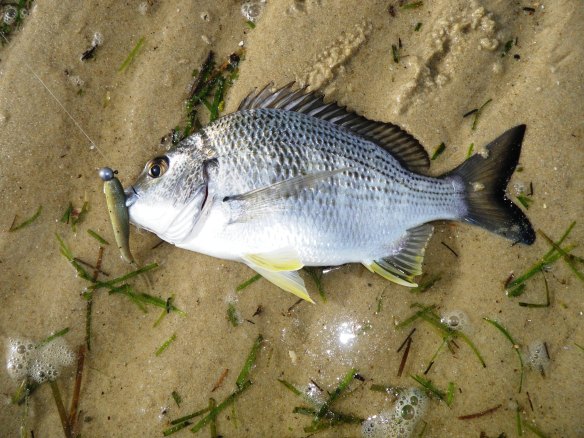 Then I found the Flathead. The tide was running in, solidly and the weed had cleared up. Just after 10.00 am, I caught the first one – around 30cm long. It was quickly followed by a couple of 40cm + fish. I switched to a Gulp Crazylegs Jerkshad in the Curry Chicken colour. I caught a couple more undersize fish and then two good ones – at 48cm and 54cm. All the fish were caught on the same 30 metre stretch of sand and by 11.30 am, I had a full bag limit of five.

A full bag of Bribie Flathead from 41cm to 54cm

It had been a cold and blustery morning and I had put in a lot of hours before I found the good fish, but eventually I located them. It may have been the tide change that encouraged them to feed. Once I had my five I decided to head for home and thaw out.