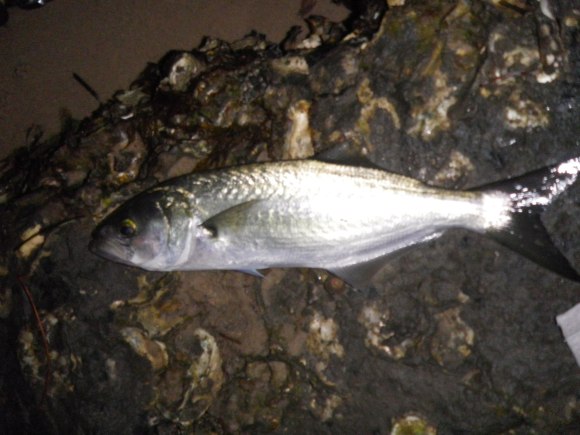 I drove up to Bribie Island for a quick early morning fishing session. Rain was threatening as I arrived, at around 5.30.am. The tide was running in and I decided to start under the bridge in the shallows, on the island side.

I started with a GULP 5” Crazylegs Jerkshad in the Curry Chicken colour. After a few casts and solid bites, a fish bit the tail off. I re-rigged with a GULP 4” Minnow in the Pearl Watermelon colour. I was fishing with a 1/6th 1/0 jighead and my light spin rod. After a couple of casts I caught a small Tailor – just around the 30cm mark. I let it go and cast out again, under the bridge lights. Bang – the fish grabbed the lure as soon as it hit the water – it was just before dawn. It was another small Tailor. I let it go and re-rigged with a brighter coloured soft plastic – the GULP Jigging Grub in the Pink Shine colour. After a couple of casts this also brought up another Tailor.

As the sun came up I decided to move down to the mouth of the tidal lagoon in front of Buckley’s Hole, at Bongaree. I waded out into the tide, which was now running in strongly. I cast out the Pink Shine soft plastic and as it sank I felt the line go tight. There were lots of head shakes and a few moments later I had the biggest Tailor of the morning at around 35cm. I fished on for around 30 minutes and finally gave up at about 7.30am.

There are clearly plenty of Tailor around at the moment and the surf beaches and rocky headlands should produce some good fish over the next few weeks.