I started early and I could see from the rustling trees that the strong southerly wind had not really dropped off. I set off at 3.30 am, from Brisbane, arriving at Caloundra at about 4.30 am. My trip up here last week had got me interested in the land-based fishing opportunities at this end of the Pumicestone Passage, so I was back to do a little more exploring.

Low tide would be at 7.20 am, with first light just before 5.00 am. The low tide would be better for establishing where the possible fish hiding places would be. I was looking for the rock bars, sand banks and sea grass beds.

I started at the far northern end of the Passage, where it runs out into the ocean. The Caloundra side of the mouth has lots of exposed rocks at low tide. It has a few shallow tidal lagoons, that you need to cross to reach the main channel, nearer to the northern tip of Bribie Island. The water was running out much too fast to fish the main channel.

At about 4.45 am I started casting a 4” GULP Pearl Watermelon Minnow soft plastic lure, on a 1/8th 1/0 jighead back, against the run out tide and then retrieving it along the sandy bottom, close to the submerged and semi-submerged rocks. I could not stop for long as the plastic would get wedged into the rocks by the quick running water. I lost of few jigheads, but that is the price of exploration. I moved a bit further out on to the sandy area and cast into the eddies, where the water had slowed down a little. This paid off and suddenly I felt the solid thud of a Flathead. I paused and forced myself to count to ten, then I struck. I had hooked it and played an angry fish back to the shoreline, It was a 63cm Flathead. As it grew gloomier and the wind picked up, the sky started to spit big splashing rain drops. I decided to wade back to the car and wait until the squall blew over.

It only took about 10 minutes and then I was back out on the rocks, this time I put on a GULP 3” Minnow in the Lime Tiger colour. I moved back along the Pumicestone Passage in the direction of Golden Beach. I was casting around in the shallow water – about 20 cm to 1 metre deep. Every now and then, I would lose a jig head to a patch of rock. I gradually found patches of smaller Flathead and caught 5 fish that were about 35cm long, over the next hour.

Another shower threatened so I decided to move round to the sand flats, just north of the Power Boat Club – near Golden Beach. The rain had passed by the time I arrived. Just in front of the club there a few clumps of sea grass, in a line, about 25 metres from the shore. The tide was now running in and the water was beginning to cover them. I waded out and cast all around them. I was using the 4” Pearl Watermelon Minnow soft plastic on a 1/8th 1/0 jighead and 12lb fluorocarbon leader. I soon caught another fish – a Flathead about 55 cm long. It was lying a metre off the weed beds in about 40cm of water.

The best fish of the day was caught pre-dawn

Caloundra – this is where I found the fish this morning 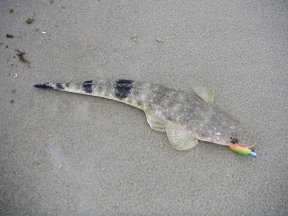 There were plenty of 35cm Flathead around the rocks

This one grabbed a Lime Tiger Minnow 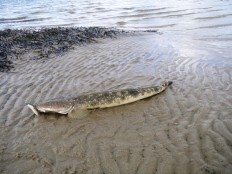 FInd the seagrass beds and the Flathead are usually close by

The Bivi has a great profile

The Bivi lure lodged nicely in the corner of the mouth

The DUO Tetraworks Bivi – this was an excellent colour choice in the clear water
Those of you who are regular readers will know that I am hopelessly addicted to soft plastic lures, but I also fish with blades and, more recently, with hard bodied lures. A nice gentleman from DUO Lures in Japan recently asked if I would try some of their products and I agreed. I explained my usual rules which are – if I have been given something for free, to try out, I let my readers know and I will also let them know how the try out goes, good or bad. He was happy with that and confident that his products would catch fish.

He sent me a few lures and I particularly liked the look of one called the TETRAWORKS BIVI. It is basically a nicely weighted 3.8g resin blade. It has a bit more substance than a metal blade but seems to retain the traditional vibe action. As I now knew there were fish in the area, I decided I would give it a try. The colour was a semi-transparent silver on top and a bright yellow underneath. It looked good in the clear water and skittered nicely over the sandy bottom.

I decide I would give it 30 minutes to prove itself. I waded along the weed beds casting all around and trying a few different retrieves. There was a still a bit of sea grass floating around and the wind was now blowing strongly from the south east, but I kept the lure in the water and it did not get clogged up very often. After about 20 minutes I felt a bit of resistance. I thought it might be a clump of weed but then the line went taught and there was some furious splashing. It was another good Flathead about 60 cm long. When I landed it, I saw the lure had got a good grip through the corner of the fishes mouth. So full marks to DUO for this one – you can have a look at the range on their website http://www.duo-inc.co.jp/en/ and now I know they work, I will find out who supplies them in Australia and let you know.