Fly fishing again – we started at noon and our guide suggested Dee Lagoon. He explained that we would fish from his boat and try to take advantage of a ‘beetle drop’ to sight cast at rising trout. 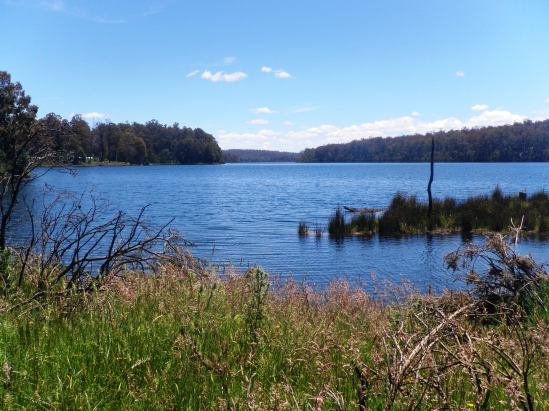 A word of explanation for novice fly fisherman – self included. On warm days in the summer months Eucalyptus Beetles (which look a little like olive green ladybugs) hatch in the gum trees beside the lakes and fly around for a bit before dropping into the lakes where they sit on the surface frantically wiggling. The trout scout around below, popping up to snaffle them.

Our plan was to wait until we could see a Trout cruising along the forest fringed shores and cast a Eucalyptus Beetle patterned fly in to its path. We arrived at a likely spot on the north shore but we immediately realized there were a couple of problems with the plan. Firstly, it was a clear, still day with not even a ripple on the surface of the crystal clear water, so the fish would see us coming. Secondly, there were spent Eucalyptus Beetles all over the surface of the water. There were literally thousands of them and they were still falling.

The Trout were cruising the shore line

We cast at a few Trout but they were not interested in our flies. We would watch them turn towards the fly as it dropped, approach it and then turn away. We moved around the lake but the story was similar all over it – there was just too much food around and the fish were stuffed.

At the northern end of the lake we came into a corner called Station Bay where a few small Brown Trout were rising close to the bank. We came in close and put a few casts in their direction but again we could not tempt them.
We tied up against a semi- submerged stump to watch and see if they would continue feeding. A light breeze had blown the spent beetles into a slick with some other debris. I saw a big swirl at the end of it and then I saw a good sized Rainbow Trout – 3 or 4 lbs, just under the surface. It had not seen us and took a mouthful of dead beetles then swirled away. I put a cast to it and it swam in to inspect my fly, then slowly swam away. 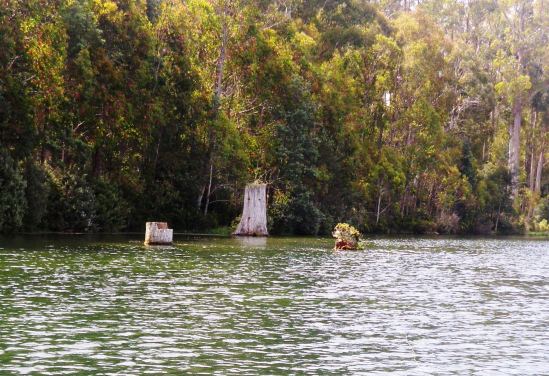 Drop the fly between those stumps

For the next 30 minutes it came back time and again. Our guide put every fly he had on and each time the reaction was the same – immediate interest as the fly plopped on to the surface and then, after a quick inspection – rejection. Finally this beautiful fish disappeared.

My father decided on a more direct approach and tied on a wet fly – a small olive coloured sinking nymph. He started to prospect in the deeper water and eventually the line came up tight. But after a few minutes of playing a good fish, the line went slack. When he recovered the line the fly was gone – the 3lb leader was just not enough.

That was it for the day and whilst it had been fantastic to see how the Trout operate, I wanted to catch one. Back to soft plastics tomorrow!