Back up to Bribie Island and Bongaree – but early in the morning this time. Unfortunately, I would be fishing the dirty water on the bottom of the run out tide. Low tide was at 8.30 am. I arrived on the Island side of the bridge just before dawn, at about 4.45am. The last bridge light is out at present – so I could not see much action but I could hear plenty of surface activity.

I started with a small popper but this just kept collecting weed, so I swapped to a GULP 3” Minnow soft plastic in the Lime Tiger colour. This did not produce a bite so I swapped to a bigger 4”Minnow in the Peppered Prawn colour. As the sun came up, the surface action slackened off and I decided to move down to the mouth of the tidal lagoon in front of Buckley’s Hole.

The water was still stained a dark brown and was very murky but it was already much clearer than the day before. I put on a GULP 3” Minnow in the Pearl Watermelon colour, on a 1/8th1/0 jighead. I was fishing my light spin outfit with a rod length of 8lb breaking strain fluorocarbon leader, tied on to 8lb braid. The plastic got a few hits and then connected with a fish. It was a Pike, which I had hooked through the back. I released it and felt a few more bites on the next few retrieves. Then I caught another fish – a very small Chopper Tailor. I swapped to the same soft plastic in the Lime Tiger colour and this time, I caught a small Moses Perch.

There were obviously plenty of small fish around so there should also have been some big ones nearby, but I was having trouble finding them. I waded up and down, casting over the edge of the ledge that runs along here. The dirty water meant it was hard to see where the drop off was, so I prodded in front of me with my rod.

At about 6.30 am I was wading north and I had almost reached the drain that empties into the Passage, just south of the new museum. By now I had swapped again to the GULP 4” Minnow in the Peppered Prawn colour – I thought the silver fleck might help in the murky water. I felt a tug, but I struck too soon and pulled the lure out of the fish’s mouth. I cast back in the same place and slowed it all down. After a few twitches – bang, another bite. This time I did the full slow count to ten and then set the hook – the fish was there and I had it. I kept the drag loose and waded slowly back to shore. It was a Flathead – 52cm, no monster but at least I had one fish towards dinner.

The drain by the Museum – Bongaree

Flathead have been hard to find lately – but they are there 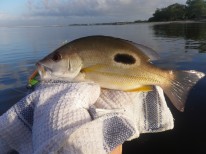 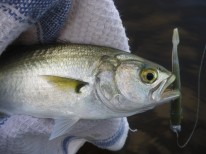 I carried on wading south. When I was about level with Buckley’s Hole, I lost a few tails from the soft plastics and then caught another small Tailor. Every now and then something would send the schools of small Tailor flying up towards the beach – but whatever it was did not show itself. As I could not see my own feet in the water, I decided to remain in the shallows. Could have been Mackerel and then again could have been something nastier!

By about 10.30 am I was no closer to finding another Flathead and the northerly breeze was stirring up the water, so I gave up.