I am still working, and slowly getting used to just fishing at the weekend. It’s not much fun is it? Still I can’t complain – I have nearly finished my work project and will be back fishing, full time, in a few weeks.

This morning I drove up to Bribie Island for an early start. It would be a 2.1m high tide at about 6.30 am. I arrived a bit before 5.00 am and started fishing under the bridge on the Island side of the Passage. The tide was running in strongly and was approaching high. The session started with a soaking from an early morning shower. I fished around under the bridge with a soft plastic minnow and had a few bites but could not hook anything. The tide had lifted the weed and, as usual it was floating around in the eddies and clogging up the lure. After 20 minutes, I decided to move on.

I drove down to the drain in front of the new museum. I walked down the rockwall and out, along the sand bank, that runs along the southern edge of the drain. As dawn broke there was a bout of surface feeding, just at the mouth of the fresh water drain. I put on a GULP 3” Minnow in the Banana Prawn colour on a 1/8th 1/0 jighead and positioned myself just to the north of the drain, about 10 metres from the shoreline. I then cast back towards the drain mouth. When there is a 2m high tide the drain mouth is covered by about 1.2m of water. The predators move up in to this area on the rising tide, very quickly, to feed on the fish, crabs, worms and grubs that are washed out through the mouth of the drain. Once the sun was up I could clearly see where the tea- tree stained, run off meets the sea water coming up the Passage. This is a good area to concentrate on. I cast up, under the bridge over the drain and slowly bumped the lure along the bottom. I lost a couple of tails to small fish and changed for a new plastic, each time.

The surface attacks continued, something was feeding on the bait schools that were siting just out of the current, close to the shore. A few more casts and I felt a bite. I struck a bit too soon and pulled the lure out of the fish’s mouth. I dropped the rod tip again and paused for a count of five, then struck. This time it was on and it took off. Fortunately it swam away from the clump of mangroves. I played it out and when it seemed tired enough I pulled it slowly up the rock wall for a few photos. It was a Flathead just over 50cm long. I let it go and went looking for more. 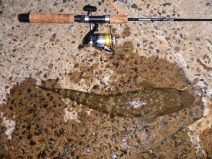 A few more casts in the same spot and I had another fish on. It was a smaller Flathead this time – just over 45cm. I measured, photographed and released it. I cast around closer to the bank and felt a few bites, close to the bridge structure. Then the line went tight on a smaller fish. It was a Moses Perch and I suspect these were what had been causing the commotion on the surface earlier.

I only had a few hours so I had to stop at about 7.00 am. The water was fairly clear and although the midges were buzzing around everywhere, conditions were pretty much perfect. I am looking forward to getting back out again soon.