On Friday it was Port Lincoln and Coffin Bay, in South Australia. Unfortunately there was no time to fish in Coffin Bay but I did manage a quick, early morning, land-based fishing session in Port Lincoln. I was staying in the Lincoln Hotel, which is a great spot. I looked over the maps and checked a few online fishing forums and decided I would try fishing for an hour or so, on dawn, at Snook’s Landing.

I drove out in the dark and parked up just as the slight glow began on the horizon. I rigged up with the GULP 2” Shrimp soft plastic in the Banana Prawn colour on a 1/8th 1/0 jighead and started casting around. It was a misty morning and again there it was dead calm with no breeze.

As the sun started to illuminate things, I worked out the lay of the land. I was on a rocky foreshore just beside a jetty and a Tuna pen. It did not look like there were any fish in the pen but who knows. A local had explained the day before that the Port Lincoln commercial fishermen actually ‘ranch’ the Tuna here. They find the big schools out to sea and then throw huge seine nets around them. The tuna are not landed at sea but are transferred, by divers into a cage and towed back to the pens in the Spencer Gulf. The tuna are in the pens for only a few months and are fed local baitfish to fatten them up. Then they are gradually harvested and exported, usually for the global fresh sashimi market.

The pen was a few hundred metres away but I hoped its presence would mean there would be some fish hanging around. I moved along the shore casting around and quickly losing a few rigs to the rocky bottom. As the sun blazed over the horizon I saw a few surface bust ups and felt a few bites. Then I saw some prawns skipping along the surface and cast straight in front of them. The fish hit the soft plastic on the drop and took off. There was a bit of head shaking but it was only when I pulled it up on to the rocks that I could see what looked very like a large Pike – which I believe is often confused with the Snook in these waters. I took a picture and sent it on its way.

The sun on the water seemed to have got things going and every now and then, there were surface bust ups and bait jumping close to the shore, as something attacked. I had found my favourite GULP 3” Minnows in the Pearl Watermelon colour and I was now using these. After a few casts I felt a solid hit and line was peeling. Then I saw a tiny Salmon break the surface and start leaping around. I was amazed at its power to strip line despite its tiny size. I pulled it in and released it. It was probably only between 20 and 25cm long! 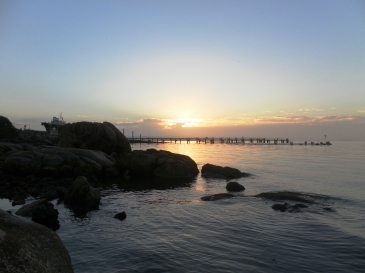 Sunrise over the Tuna pen 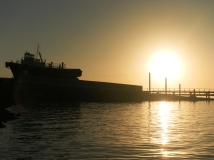 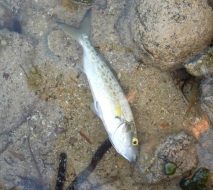 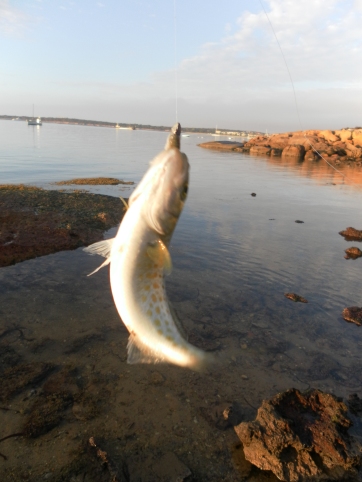 There were plenty of small Salmon 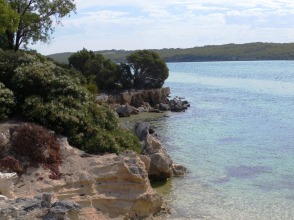 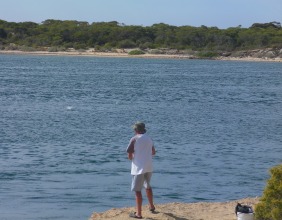 The pattern was now set and for the next 30 minutes I caught about 10 fish this size. The school of Salmon would swim around the bay; herd the bait towards the rocks and then attack. I would cast into the area and the fish would grab the lure as soon as it hit the surface. Unfortunately, by about 8.30 am I had to go.

Later in the day I did find myself briefly, at Coffin Bay and although there was no time to fish, I watched a few holiday makers catch some nice King George Whiting and, again witnessed the Salmon slamming into the bait schools on the surface. South Australia Cockles (which looked like Pippis in Queensland speak) were the preferred bait. This is a very special spot and Landangler has definitely marked it down for a return visit.