Sunday was a grey and rainy morning. The early starts and drives south had worn me out so I had a lie I, until 4.15 am and then decided on a quick wading session at Bribie.

I drove through a few showers on the way up and decided to stay on the mainland and fish the weed banks and mud/ sand flats, south of the old oyster jetty. The jetty is now out of bounds pending re-development but it has been repaired and made safe. The complete removal of the tree cover in the area has made the light quite different and I have been wondering if it will affect the weed growth and therefore the fishing. The terrain has flattened out a quite considerably but I think that has more to do with the change of wind and current, as we settle into a more obvious summer weather pattern.

I arrived just after 5.00 am and the sun was up, but buried behind the grey clouds. I waded past the jetty and had a look around. It was just about slack water on low tide. There was no surface action and the water was pretty murky. I tied on a 1/8th 1/0 jighead and loaded it with a GULP 5” Jerkshad in the Curry Chicken colour – red and yellow. Unfortunately the bright dry sunny days have encouraged the growth of the ‘snot weed’ or algae. This takes particular hold in the areas where there is not much current flow. It means you get a jighead full of slime if you hit the bottom.

Once you reach the edge of the weed beds you can cast parallel with them and avoid it. But don’t go past the sandy patches between the weed as these often harbour a few fish and this was where the first Flathead came from today. It slammed the plastic as soon as it hit the water and I hooked up without really trying, as it tried to swim off with it. It was just under 50cm.

I let the fish go and swapped to a another small hard body from DUO that I have been wanting to try out – the DUO Realis Shad 59 MR. This is a small suspending lure designed for bass but suitable for plenty of other species. It is finished to the usual superb standard and I chose one in the olive colour to try out. I had upgraded the trebles and split rings for saltwater work – the Flathead don’t take prisoners!

It was a very brief sunrise

The bright red got them going today 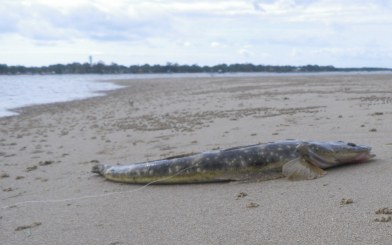 The last one of the morning

Clear evidence-Flathead have been here

I was pretty sure there was more than one Flathead in the sandy patch in front of me and my first cast with the Realis Shad confirmed it. After two quick hops of the lure, a fish knocked it out of the water and then swiped again with a splash. But I did not hook up, so I wound the lure back in and cast out again. This time I let it sit for about 10 seconds – and then gave it a short pull. A fish attacked again and this time it was hooked. But the fish was only about 30 cm long.

I let it go and tried again. After about three more casts, the line pulled tight and a really angry fish surfaced. I pulled this one over to some exposed reef and landed it. This time good Flathead about the same size as the first of the day. I sent it on its way and moved south.

The tide was now flowing in strongly. I waded along casting over the weed beds. I caught two more Flathead – both about 45cm long, on the Realis Shad. The incoming tide had now lifted lots of strap weed and this was starting to clog the hard bodied lure. I swapped back the GULP curry chicken Jerkshad and this tempted two more 45cm fish before I gave up at about 8.30 am.

As I waded back along the shoreline there were Flathead ’lies’ everywhere. Many were very close to the Mangrove roots, showing that the fish will move up into very shallow water on the higher overnight tides.

You have a very good chance of catching dinner at the moment, especially if you get up early!