I have rented a place at Bribie Island for December and January, on the surf side of the island. I am determined to get to know the fishing on the ocean beach and particularly, around Skirmish Point and Red Beach. I have always found these to be tough spots but I am convinced the fish must be there, somewhere.

On Sunday evening I had braved the howling northerly winds to try and fish around Skirmish Point, on the dusk low tide. I tried plastics and a few hard bodies but the wind and weed made things difficult. I caught nothing but was delighted to watch the dolphins having a bit more luck, chasing the baitfish right up on to the sand. I walked all the way from Skirmish Point to the end of Red Beach with just a few nibbles on the soft plastic lures. Red Beach is the only wind free spot in a big northerly blow.

For the Monday morning low tide (which would be at about 5.45 am) I decided to fish the drop off at Bongaree, along beside the saltwater lagoon, in front of Buckley’s Hole. The lagoon now has an opening much further to the south, which should fish well on the higher tides. On Monday, I waded out, close to the ledge at about 4.30 am and stopped about 10 feet away to cast along it, to see if any Flathead were lurking just on top. I waded up and down and gradually started casting over the ledge. I was using a GULP Swimmow soft plastic in the Banana Prawn colour on a 1/8th 1/0 jighead, with 10lb fluorocarbon leader. Nothing stirred – no surface action, no bait sprays, it would appear that the fish were asleep. The water was still and the sun was just coming up behind me.

Suddenly, I felt a solid hit, then another and then the fish hooked itself, before I even struck. It was a tiny Tailor. I unhooked it and let it go and cast out to see if there were any other predators nearby. But again, nothing happened. In fact nothing happened for the next two hours, so at about 8.30 am, hot and bothered in my waders, I gave up.

A great sunrise at Buckleys Hole 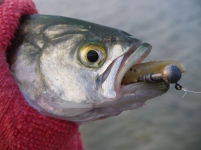 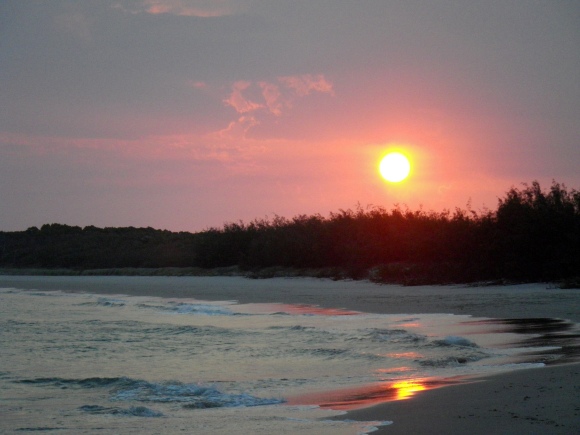 By afternoon, the northerly had blown up again and I walked down the beach to Skirmish Point to fish through dusk. Things looked promising with a flock of birds circling just out of casting range. I was using my beach rig which is a SHIMANO Catana Coastline Light 9’ rod with a Sustain 4000 reel. This will throw any lure under about 30 grams and is also good for 1/8th to 1/2 oz jigheads with bigger soft plastics. My plan down here will be to cast away with hard bodies and plastics, on dawn and dusk, for as long as it takes!

It could be a long time. I cast and cast and cast and did not get a touch. The RAPALA Clackin Rap hard bodied minnow that I was using, eventually gave up before I did. It lost its bib to nothing harder than the current and a sandy bottom – more evidence that RAPALA need to toughen these lures up. On sunset a kite swooped down to pluck a Mullet from the shallows, right in front of me. At about 6.45pm I gave up.

It had been a tough day and I am beginning to feel like Ricky Ponting!