The wind was calming down and the low tide around dawn meant that fishing the Passage again would be a good option. I decided to go and have a look around on the flats in front of the old oyster jetty, on the mainland side.

I arrived beside the bridge just after 4.30 am. Low tide would be at 5.12 am so I started fishing in the slack water. The strong south-easterly had died away in the night and there wasn’t much breeze. I waded south, along the exposed sand spit, towards the green channel marker.

About half way between the end of the oyster jetty and the channel marker, I waded out to just short of the edge of the weed beds. I started with a GULP Crazylegs Jerkshad in the Lime Tiger colour, on a 1/8th 1/0 jighead. I was using 10lb fluorocarbon leader. Just after 5.00 am the water started to run in. I waded towards the channel marker, casting into the water, as the tide picked up pace. At about 5.30 am I felt a couple of hits and could see some bait scattering around my lure. I kept casting in the same location and 5 minutes later I had my first flathead of the day. It was a dark coloured weed dweller, just over 45cm. I was releasing everything today – as we are still struggling through the Christmas ham!

I did not want to change a winning formula so I threw the same soft plastic lure back out, in the same direction and after a few casts, I had another. This one was a little bigger – perhaps 50cm. I let it go and persisted in the same general area. The next fish hit the soft plastic on four separate casts before it finally got serious. I had slowed everything down and lengthened the pause in the area that I estimated it had reached. After a long pause, I lifted the rod and the plastic was half way down its throat. This one was also about 45cm. I moved gradually south and caught two more undersized flathead within 10 meters.

I decided to see if I could tempt them with one of my small DUO hard bodies. The DUO Ryuki Spearhead 70S is a 70mm, 9g, sinking, flat-sided minnow designed to catch trout in fast flowing streams. Once the current is running it will swim in one spot with a great action and good rattle, just from the water flow. It is built to the usual DUO high standards and comes in some great colours. There is a pink stripy silver one which I selected, which looks like it would be the perfect flathead lolly.

The lure has a bit more weight than the shorter version and therefore casts well on my light spin combo. I decided to cast with the current flow and then retrieve the lure back through the run-in tide to get the most of the action. I kept plenty of long pauses in the retrieve and it was as I lifted the lure off the bottom, for about the fifth time on the first cast, that the flathead struck. The fish always seem angrier when they hit a hard bodied lure – maybe it’s the treble hooks. I hauled this one back to the sand to release it. It’s is never a good idea to try removing a treble from a wriggling flathead that you have clutched to your chest whilst wading, better to deal with it on the sand with a good set of pliers. 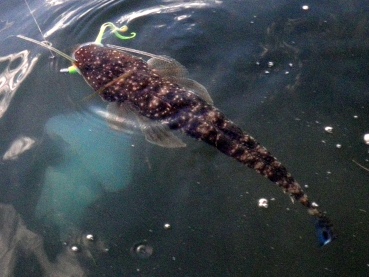 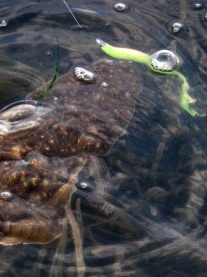 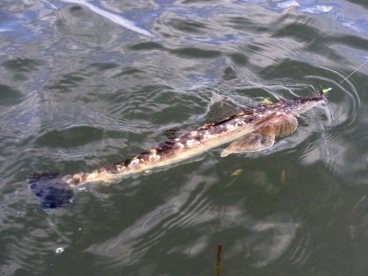 I let it go and then waded back out to where I had been fishing, along the edge of the weed beds. The next fish took a while to find but about twenty minutes later, I had another on the same DUO lure. It was also somewhere between 40 and 50cm.

The tide was now running in strongly and lifting plenty of sea grass. This gradually made it impossible to keep fishing with the hard body lure. The tide was also pushing me back from the edge so, at about 8.00 am I decided to give up.

I had travelled from flathead famine to feast in 48 hours. Was it the strong south-easterly blow that had brought the fish in, or the run in tide, or the lure choice – that is the trouble with fishing – too many variables!