Apologies for the lack of fishing updates. Landangler has been working again – to pay for all those lures! I found myself in Singapore for a few days and decided to make a quick trip down to Tekka Market near Little India. This is the largest fish market near the centre of Singapore but it has the added advantage of serving one of my favourite Asian breakfasts – roti prata – Indian fried bread with a fierce curry sauce.

I walked around the market and looked at the fish stalls, first. I was struck by how small most of the fish (and crabs) were. We are very fortunate in Australia to have such healthy fisheries. Most of the fish on sale would not have reached Australian size limits. Most of the tuna I saw would only have been considered for Spanish mackerel baits back home! Some stalls had one or two decent size mackerel, a few reasonable sized reef species and plenty of small rock cod. There were piles of smaller fish, – pomfret (a bit like a butter bream), juvenile Trevally, milk fish and lots of tilapia (which is a big favourite).

Largely because of cost considerations and a preference for cooking fish whole – these small fish actually sell very well – which is not a good omen for the future of the local fisheries. Even the tiny fish fry do not escape – they are often dried and then added to curries and stir frys. The waters around Singapore are some of the busiest in the world. With literally thousands of islands off Malaysia and Indonesia, fishing regulations would be virtually impossible to enforce. Fortunately for the fish, poverty and seaways jammed with huge container ships keep bigger trawlers out – but it is certainly not a sustainable model. The authorities are understandably more focused on protecting shipping from piracy (which is a big problem) than developing a sustainable open water fishing industry.The prawns were a different story. There were piles of beautiful looking, huge fresh tigers and other smaller species. These are all farmed in Malaysia and brought in for sale in Singapore, where the best quality will fetch better prices. 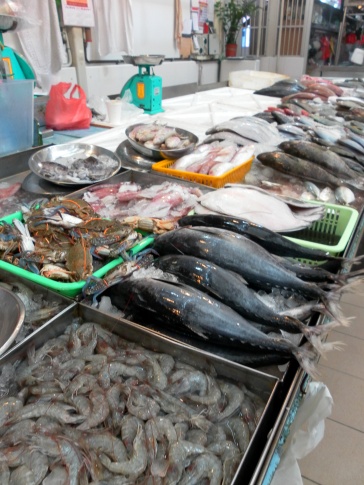 Tiger prawns this big can only come from the farms

Murder to fillet these

I would not want to gut these

Some kind of small trevally

How does and undersize NZ snapper end up here

I also visited a few supermarkets and was alarmed to see a tiny (20cm) whole NZ Snapper for sale – and lots more packs of very small fish. So next time you have a bad day or consider your catch of a few 28cm bream a bit disappointing – pinch yourself. This is still ‘the lucky country’ as far as fishermen are concerned.