I was back in Brisbane considering the land based fishing options. Next week it looks like mad weather – just about everywhere. It’s a tragedy – I have no work on the horizon so I could go and fish just about anywhere, but it looks like the east coast of Australia, will be washed out.

Friday morning did not look very promising locally, either. The big south-easterly blow was not forecast to drop off until about midday and the Pumicestone Passage was pretty much full of fresh water, after all the recent rain.

But the point about fishing is you must never give up. So at about 8.00 am, as the sun came out, I set off for Bribie hoping to find some sheltered spots, where I could put in a few casts.

I arrived just before 9.00 am and decided to fish the mainland side of the Passage around the old oyster jetty. Despite the major tree clearance that took place last year, this area is still quite sheltered from a southerly wind and is a viable option, especially as the tide runs out. High tide had passed at 7.22 am at 2.2 m. I waded south, under the Bribie Bridge. The water was still lapping at the mangroves, but it was running out fairly fast. Predictably the water was pretty brown and full of sediment but you could still just see your feet through about 60cm of it.

I started by casting all around the bridge pylons. I was using a neutral coloured 3” GULP minnow soft plastic in ‘smelt’on a 1/8th 1/0 jighead. This produced nothing so I moved further south, to cast alongside and underneath the oyster jetty. I felt a few grabs in this area and soon realised there were some hungry long toms cruising around.

I crossed to the area just to the south of the jetty and swapped to a DUO Ryuki Spearhead hard body which is usually a great bream lure. Unfortunately I sacrificed this in the shallows to a patch of rocky bottom. I moved further south and changed tactics. I swapped back to soft plastics and tied on a GULP Crazylegs Jerkshad in the lime tiger colour – still on a 1/8th oz, 1/0 jighead. I was using about 1.5 m of 10lb breaking strain fluorocarbon leader.

By about 11.00 am the tide was about halfway out and I had reached the area where the water drains off the Sandstone Point flats, round the corner. You could not see the bottom but you could tell from the eddies on the surface where the slack water was. I put in a couple of long casts (the southerly wind was helping me). I felt the plastic pull through the see grass but it did not pick up too much. The advantage of all the rain and wild weather is that it washes away any loose stuff.

A few casts later there was a big splash, as the lure hit the water and then a solid tug and run. Line was peeling straight away but as I lifted the rod I clearly felt the jighead pop through the fishes’ lip. This was a sizeable fish so I let it run. There is not much structure in this area, just a line of rocky bottom as you move back towards the mangroves. This fish was too big to tangle with in the water so I would have to walk it back to the shore line. I slowly took back some line and started wading towards the mangroves. The water was now shallower and dirtier, so I had to be careful to steer it over the rocky patches and onto the shore.

It was a solid flathead. I pulled it up on to a ready-made envorimat; a pair of abandoned trawlerman’s waders, that had washed up on the shore. I measured it against the rod and could see it was pushing 70cm. I took a couple of pictures then released it.
Although the water was now very cloudy, there was not much weed floating around so I decided to try out my latest DUO favourite – the Realis Shad MR 59 hard body minnow. It is a small suspending lure and that has caught plenty of flathead for me, but I am sure it will catch good bream over the weed beds. I picked out a white and blue one tied it on and cast out. This lure has a great action but it is the pauses that seem to entice the strikes. So I slowly retrieved it with lots of long pauses. On the second cast my theory panned out as, on the first pause, the lure was first knocked out of the water and then, a moment later, connected to a fish.

The hooked fish was too fast for a flathead – although it may have been a flathead that attacked the lure first. I soon had it subdued – it was a solid 30cm + bream. After a few pictures I released it but I could not find any more.

It would not shake this loose 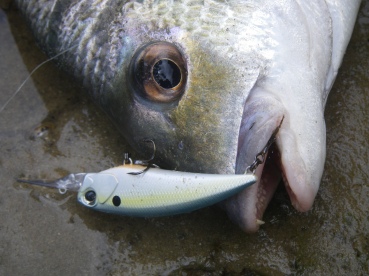 It crunched off one treble hook but it did not escape 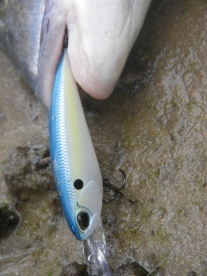 It started with two sandcrabs fighting over the lure 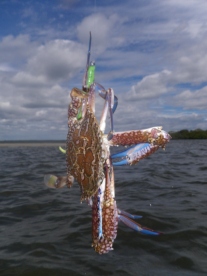 This one was about 50cm

As the tide level fell I moved further and further south, towards the green channel marker. I was trying to fish the edge of the weed banks but in the dirty water on the bottom of the tide, I was finding it hard to see the edges. I swapped back to a GULP 4” minnow soft plastic in the smelt colour, on the 1/8th 1/0 jighead. This drew the attention of the long toms who I saw follow it in a couple of times. Eventually I got the lure into the right spot and the line started peeling. It was another flathead – just over 50cm. I decided to keep this one and after playing it for a while I managed to grab it with my rag and slip it in my keeper bag.

I swapped to a different colour in the same soft plastic – banana prawn. A few casts later this produced a fish – it was a very lively long tom. It did plenty of leaping around and made a couple of runs straight at me which was not that much fun. Usually these fish will cut through the leader pretty quickly but this one seemed to be hooked on the side of its long snout. I managed to flick it off the hook and carried on prospecting for flathead.

Just before 2.00 pm I caught another flathead who was perched on the edge of the weed line. This one was just under 50 cm. I swapped over to the bigger GULP Crazylegs Jerkshad soft plastic in the lime tiger colour. This did not produce a fish but it did pull up two sand crabs. I am not sure if they were hungry or mating – either way they ended up in a right tangle. I had been playing football with the crabs all morning – perhaps they were finding it difficult to see me coming in the muddy water.

Just after a 2.00 pm, a set of squally showers moved through and I decided to give up. Conditions had been very average but the fish were there – and I suppose that is all that really matters!