Paid work had left me in Rockhampton on Friday, so I decided to have a go at fishing in Byfield National Park, over the weekend. I have a new car – an FJ Cruiser – the perfect fishing car. I love it – great clearance, plenty of power and a hose out interior. I needed to give it a workout and to get it dirty and Byfield, with its many creek crossings and sandy hills, looked like the perfect spot. There had been plenty of rain, so there would be water in the creeks, but the sand tracks would have firmed up.

I set out before first light on Saturday and drove from Rockhampton to Byfield. I grabbed a cup of coffee and breakfast in Yeppoon and arrived at the Waterpark Creek causeway, that leads into the park, at about 7.30 am. Water was flooding over the causeway. According to the depth markers it was about 400 mm deep – no problem for the new motor. You have to watch this spot when there are showers around, as a lot of rain runs off into this creek. The water level can rise very quickly and leave you stuck on the wrong side.

I had wanted to visit Five Rocks Beach but due to the recent wet weather, the tracks in that direction were closed. I headed for Nine Mile Beach, instead. It takes about 45 minutes to an hour to get to the beach from the causeway. The biggest obstacle is a climb up a big sand hill. The track was a bit churned up towards the top but it was fairly firm. I am not sure that the old Suzuki Grand Vitara would have had the clearance to make it, but the FJ rolled over the top.

Nine Mile Beach is spectacular and looked particularly wild with the grey clouds rolling in. The wind was howling so I decided to drive down the beach to find some shelter and fish in Corio Bay. At the end of the beach there is a small track that leads across the back of the headland. I took this and found some sheltered water. I believe this area is Corio Bay. The rain kept coming over in squally showers.

I took out my light spin rod and reel and wandered along the mangrove fringed banks of a sandy channel. In between the mangroves, rock bars protruded into the channel at regular intervals, forming a couple of small bays. The tidal variation is huge here, often rising 5 metres from low to high. By the time I started fishing it was about 11.15 am – low tide had passed at about 10.30 am. The water was dark grey and very muddy. The area looked very fishy and I heard a few big gulps, in the eddies around the edges of the rock bars – could have been cod or even a barra – who knows?

I started with a Zman Minnowz in the Houdini colour, on 1/8th oz, 1/0 jighead. I was fishing with 10lb fluorocarbon leader. I lost a few soft plastics and jigheads to the rocks. I re-rigged with the same plastic and cast out and suddenly a fish connected, tight against the rocks. It pulled hard and kept taking short determined runs. I thought it might be a cod but it did not stop still, like a cod would. I got some line back, but it was now under an overhanging rock and I could feel the line rubbing. I did not have the power to pull it out with the light rod. I saw a flash of silver but could not identify it and then it must have loosened the jighead against the rocks, and it was gone.

I decided to try something a little more colourful and tied on a GULP Jerkshad in the Satay Chicken colour – a mixture of yellow and pumpkinseed. I stayed with the 1/8th 1/0 jighead and light leader. I cast it into the fast flowing water, in the middle of channel and let it sink. It was hit on the drop by something very fast and powerful. The fish ran with the fast current and took plenty of line very quickly. Then it jumped clear of the water and I could see it was Queenfish. Every time I got it close to shore it took off again, but eventually I pulled it clear of the water. I am sure it would only be considered a baby in local circles – but it was the biggest Queenfish I have ever caught. I took a few pictures and let it go. 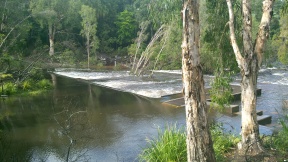 Looks scary but it is concrete and well depth marked 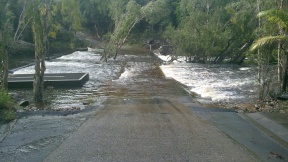 The Causeway into Byfield 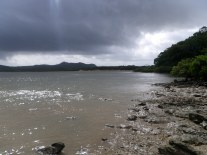 The tide went out and gradually reveled the rock bars 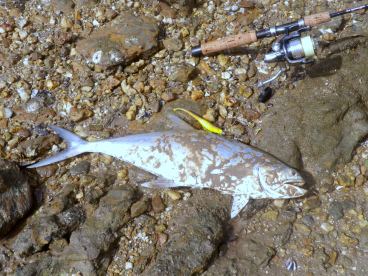 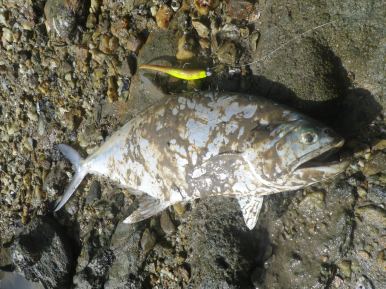 These rock bars run out into the sandy bottomed channel 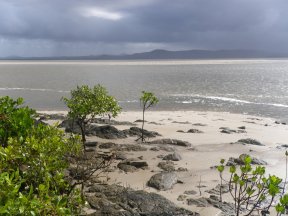 Sun one minute – drenching rain the next 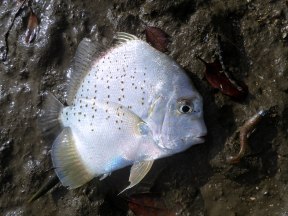 Not sure what this is but it ate the Zman Minow

I tried more and swapped through hard bodied lures, vibes and a few more soft plastics. I ended up fishing with the Zman Minnowz again. I fished around the rockbars and felt a few bites. I left the lure on the bottom for long pauses. About an hour after the Queenfish capture, I hooked something else. It pulled hard and hugged the rocks. In the end I pulled up another fish I have never caught before. Not sure what it was – see pictures. I released it and decided to give up, as another shower was coming over the headland.

I drove back through the rain, safely crossed the causeway and drove back to Yeppoon. This is a fantastic spot. I will be back!