Another cold fine morning and I decided to try Whit Patch on Bribie Island again. As you will see from recent reports fishing can be hit and miss here. The coffee rock ledge structure that appears at various points all along either side of the Pumicestone Passage creates several holes and submerged mini rock bars along this stretch of shore. 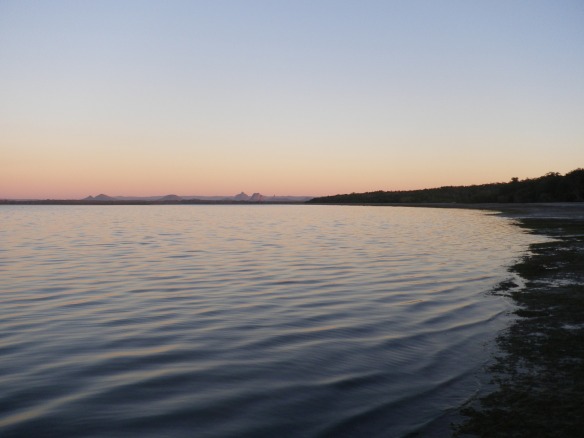 I started early in the cold at White Patch

There is a lot more sediment around after two years of floods, followed by a very wet period at the beginning of winter. This means that water clarity is not very good at the bottom of the tide. It also means that the weed/ sea grass beds that clump on the sand above the ledge, are taking longer than usual to spring up. But there must be something to eat in the area, as the first thing I saw, as I walked out in the pre-dawn light at the north end of White Patch beach, was the bristly snout of a Dugong. It was cruising along the ledge surfacing every now and then, to blow.

Great minds think alike and Bribie Island local – Colin was already out flicking some soft plastics further up the beach. I saw him pull up a legal Flathead, so I was enthused. I rigged up with a GULP 2” Shrimp in the Banana Prawn colour, on a 1/8th ounce, #1 hook jighead. I was sticking with the 8lb fluorocarbon leader.

An ambitious pike was my first customer

Low tide was at about 5.30 am – just on first light. There was no wind to speak off and I was starting fishing in the slack water just on low – which is not ideal. The first half an hour was uneventful – apart from the Dugong sighting. At about 6.15 am an ambitious pike grabbed the soft plastic but it was only about 15cm long. I wandered up and down casting diligently, but I had to wait another hour for a decent bite. I connected with the fish, which felt like a Flathead, but after a few moments it was gone.

At about 7.15 am, I caught a Flathead that was not much bigger than the pike and was sitting in only about 10 cm of water. I always forget just how quickly these fish will move up the beach with the tide. I decided to swap to the Zman range and put on a Minnowz paddle tail shape soft plastic, in the Houdini colour. I cast in all directions but this did not produce anything.

This one was only 20cm long

At about 7.30 am I swapped to a GULP 4” Minnow in the flecked New Penny colour. I cast it over the ledge and let it sink. I paused until I was sure it was on the bottom then hopped it up and paused again. On the second lift the rod bent over and then line started peeling – something decent had eaten the soft plastic. It mad a solid and long initial run. My drag was not very tight and I need to re-spool this reel, so I quickly found myself down to the backing line. Patience is the key at moments like this. I left the drag alone and wound every time the fish paused. I kept the rod tip up and maintained the fairly light pressure. I gradually covered the backing line with braid and felt more comfortable.

The fish did not have very much power left after that first initial long run and so I had an inkling it was a jewfish/ mulloway. Now I tightened the drag just a little so that I could pull the fish cleanly over the ledge. As I did so I saw the silvery blue spots along its lateral line and confirmed it was a Jewie. A gentle stroll backwards and I had it up on the sand.

I measured it – 68cm – still not legal in Queensland, but a cracking fish nonetheless. I took a few photos in the shallows then sent it on its way. I fished on for a while but I could not find anymore. I looked back through my archives and realise this is the farthest up the Pumicestone Passage that I have caught a Jewfish/ Mulloway – it’s a very encouraging sign and more evidence of a healthy fishery. 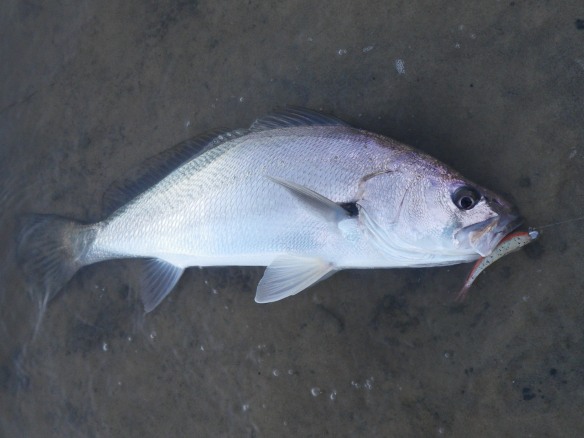 I had not expected to find a Jewfish at White Patch

I stopped for a coffee at Scoopys and ran into an old friend – local Brisbane children’s author – Julie Fison. Her Hazard River series of adventure stories are a great tool for engaging both reluctant and accomplished young readers. She has also just launched a series for teenage girls. I should warn my readership to check their pacemakers before they delve into these! Its book week in Queensland, so she was spreading the word about the wonder of reading, at the Bribie library. I would think there are some sections of our community where children don’t know what a book looks like! So full marks to Julie for taking this on. For more about the books visit http://www.hazardriver.com/. or Julie Fison visit http://juliefison.wordpress.com/. She also has an amazing and painful tale related to a Garfish encounter – but that is for another time.