Last morning in Yeppoon for a while and yes, of course I was heading for Fishing Creek. I had wanted to fish some of the headlands on this trip but the wind was up to 15 knots everyday by 10.00 am, so it had been out of the question. In hindsight, I was glad I had been forced to explore. I was enjoying fishing in this estuary system.

It was the same basic plan as Monday – walk down the creek from the top end, following the receding tide, casting into the pools and channels. I started at the shallow end with the GULP 3” Minnow in the Peppered Prawn colour. I was using my light spin rig, 2.8kg Fireline, 12lb fluorocarbon leader and 1/8th ounce, size 2 hook, jighead. This is the perfect size jighead for this size soft plastic. The weather was overcast but there had been no rain. There was a light north-easterly wind blowing but it was gradually picking up. I started just before the sun came over the horizon.

Not sure I want my lure back

And some more traditional fare 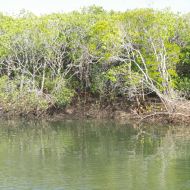 The trevally was cruising along here 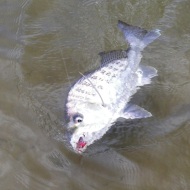 A grunter bream chews up a DUO stickbait 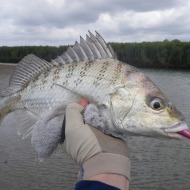 These grunter get big 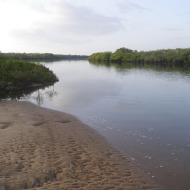 It took a while to find some fish, first some small flathead, then one that was big enough to keep, then a couple of small cod. Then I caught a magnificent spotted ray. I was tempted to let him keep my soft plastic but managed to safely remove it.

I swapped up to a GULP 5 inch Jerkshad in the Peppered Prawn colour. After a few casts, this got slammed and I thought I might have another barramundi. Then I realised this fish was too frantic to be a barramundi. After some spirited runs I saw a flash of silver and realised it was a small Trevally – these fish always pull surprisingly hard. I released it and moved on.

I reached the spot where I had caught the barramundi, the day before and decided to try one of my DUO hard bodies. I pulled out a Spearhead Ryuki 70S in a pink silver and black colour. This is really a trout lure but I have found it works well in a shallow estuary situation. The bream like it and so do the flathead. It weighs 9 grams and is effectively a sinking minnow. It is designed to maintain its action in fast flowing water and that is why it was ideal in this situation. I put in a few casts and immediately felt a few bumps. After fifteen minutes of casting, up and down current, I connected with a fish, but it spat the lure out. I cast back in the same spot and this time there was no hesitation – as soon as I took up the slack, the fish was attached.

It pulled pretty hard and the current helped it. After a minute or two it settled down and I pulled it ashore. It was a chunky grunter bream. I released it and continued casting the DUO Spearhead Ryuki 70S. I had a few more touch ups from interested fish before the inevitable happened – I lost the lure to the mangrove roots. Yet another lure to add to the very long shopping list I am collating.

It was now about 11.00 am and the wind had started howling, so I made the long walk/ wade back to the car – keeps you fit this fishing lark!