After a week at home with no time to fish it was time to get back to work. Apologies to my regular Bribie Island readers, but I have not had a chance to fish on my home territory for a while. Whilst I am missing the best time for flathead fishing in the Pumicestone Passage, I am sure there are plenty of people out there catching good fish.

I was headed from Brisbane to Rockhampton again on Friday and decided to break the journey at a suitable looking creek to have a quick fish. I chose Walilly Creek just to the west of Lake Monduran. The Bruce Highway crosses the creek via a small bridge. I parked up to stretch my legs after a few hours driving and decided the sunken timber on the western side of the bridge looked promising. It was overcast but hot and it was about 11.00am.

I rigged up the light spin outfit and loaded it with an 1/8th ounce, size 1 hook, jighead on a 2.5 inch GULP Crabbie in the Peppered Prawn colour. I was fishing with 10lb fluorocarbon leader and 8lb original fused Fireline.

I cast the soft plastic at some fallen trees and immediately got snagged. People often ask why I used the softer, light wire TT jighead series (they come in the green backed packet). I like them because, as in this case, they give and bend when you apply pressure. This has a downside if you hook a monster fish but it means that you can often bend the hook slightly and pull it out of a snag, then bend it back into shape. This means you lose a few fish but you lose a lot less gear, while you are working out what is going on under the water. The problem with fishing soft plastics in the freshwater is that the fish are always buried deep in the structure, so you have to put your casts right into the middle of it.

The bridge across Walily Creek

Always good to start with a GULP Crabbie 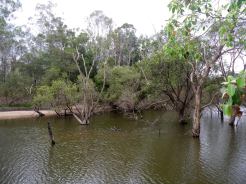 A Camo coloured GULP grub tail got this one

I certainly know how to catch these now

I straightened the hook on the jighead, pulled it free and then reshaped it with my pliers. Don’t do it with your teeth – I learned the consequence of putting a hook in your mouth fairly early on – not good! I straightened the soft plastic lure so that it was sitting right and cast a few feet to the left of the fallen tree. As soon as I lifted my rod something took the plastic into the timber. I felt the leader pulling against the branches so I loosened the drag and waited for perhaps twenty seconds. I retightened and pulled the fish free. I saw the slime covered leader and realised it was a catfish. I think I can safely say I now know how to catch catfish.

I moved further away from the bridge and caught a catfish. I moved closer to the bridge and caught two more catfish. In fact, I caught about 8 in the next 30 minutes. I change soft plastics and tried some small hard bodies. The different soft plastics caught more catfish and the hard bodies did not get a hit.
I looked at my watch. It was time to get going. I had found another creek full of fish; the only problem was they were catfish. Still it was better than sitting at the service station with a bad cup of coffee!