I was back in Yeppoon on Sunday and decided to see if the fingermark were still around at Emu Park. It would be low tide just after dawn and the winds would be light from the north-east. The temperature was a bit lower than it had been when I was last here and the water was not as clear.

I had repaired the tip on my slightly heavier rod, which is ideal for this kind of fishing – the NS Blackhole Cabin 2 S862L, rated 8-14lb, 2.59m long. I match this with a Shimano Sustain 4000, loaded with 15lb Super PE braid and I started with 14lb fluorocarbon leader and a 1/8th, 1/0 jighead. This rod is great for fishing with soft plastic lures and small hard bodied lures and slugs. It has the power to land a decent fish but is still quite sensitive. 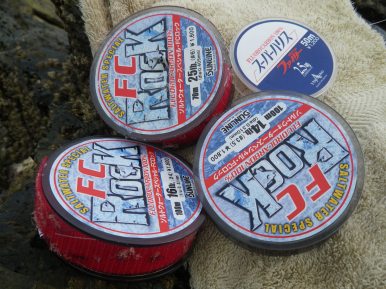 You need a range of leaders at all times

Lured by a GULP Crazylegs Jerkshad

I realise this is small for a grunter in these parts

As is often the case the first 30 minutes of the session produced the most action. I rigged up a GULP 3” Minnow in the Watermelon Pearl colour and cast it out towards a semi-submerged bommy. As soon as I pulled in the slack there was a fish attached and it took off. A few moments later I landed a decent sized fingermark – about 45cm long.

After a few more touches, I decided to put on a larger soft plastic and chose a 5” Peppered Prawn Jerkshad. After a few casts, I felt a very solid bite but when I struck the fish was not there. I cast back in the same spot and let the soft plastic sink and sit on the bottom for 10 seconds. When I lifted it, it was slammed and line started peeling. A few moments later a very big fingermark – well over 70cm leapt clear of the water. I was still attached but even my bigger rod was no match for this fish. It kept running and soon had itself wrapped around some rocks. There was a bit of see-sawing and the fish was gone.

I re-rigged with a GULP Crazylegs Jerkshad in the New Penny colour. As soon as I cast this out it was slammed, as it sank. It was another big fish and it took plenty of line. I did not get a look at it, as it also buried itself in the rocks and the leader snapped. I continued fishing with the bigger soft plastics but everything seemed to have shut down and I did not get another bite.

The next morning I was back, at sunrise. There was more water over the rocks as low tide would be about an hour later. I beefed up my leader to 20lb fluorocarbon, as I wanted to try and hang on to any big fish that I could hook. I was pretty confident but nothing much happened with the big soft plastics. After about 40 minutes something grabbed the a GULP Crazylegs Jerkshad in the New Penny colour. It was too slow for a fingermark but it was still crafty and tried to lodge itself under the overhanging rocks. After a minute or two, I pulled up a decent sized cod.

I dropped back down to a smaller soft plastic – the GULP Swimmow in the Peppered Prawn colour. This soft plastic has a small paddle-tail and creates a tight vibration in the water, as you retrieve it. After a couple of casts with this I felt a very light bite, I paused and struck, but there was no fish there. Next cast – same thing. Next cast, I left the soft plastic on the bottom for about 10 seconds and as soon as I lifted it … the fish was running with it. After a short fight, I saw a flash of silver. A few moments later, I landed a 40cm grunter.

By about 7.30 am everything seemed to shut down. I walked around the whole headland casting, but all I could collect were more small cod. At about 9.00am it was hot and I was tired, so I gave up.