I arrived on the mainland side of the Bribie Bridge at 4.30 am, just after first light. I waded straight out to the area just south of the old oyster jetty, where I had done well on the flathead, during my last session.

The tide was on its way out. It had been a 1.8m high, at about 3.30 am. There was not much flow as the moon was in its first quarter. It was a building northerly blowing with a stronger, south-easterly forecast to take over, later in the day.

There was not much weed moving around, so I decided to give one of my DUO hard-bodied lures an outing. My latest favourite is the Realis Shad 59 MR. This is a shallow diving, suspending, 59mm minnow, with a great rattle and the usual superb DUO finish. It is perfect for fishing over the weed beds and I was keen to try it with the new G.Loomis TSR series light spinning rod that I am now using. I picked out a gold/ bronze coloured one and tied it on.

The sun broke over the horizon just before 5.00am. There were a few mullet jumping around and as a few cormorants flew over, they spooked a large school of whiting/ mullet in the shallows. I started casting the Realis Shad 59 MR all around in a semi-circle in front of me.

I felt a few nudges and a couple of real bites. After about ten minutes a fish attacked hard and swam away with it. It too a bit of line but soon settled. It was a nice Bream – about 30cm long that had been cruising above the weed. About 10 minutes later, there were a few more knocks on successive casts and I hooked another smaller one.

I had made my way south, towards the green channel marker. It was just about 6.00 am and I could now cast over the edge of the major weed bank that runs along here. I felt an angry bite and then another. I pulled the trebles home and saw a Pike leap out of the water. I pulled it up close and shook it off the hooks.

The tide was now lifting a lot of sea grass so I decided to switch lures to a soft plastic. I chose the GULP 5” Jerkshad in the Watermelon Pearl colour. I loaded it on to a 1/8th ounce, 2/0 jighead and started fishing it along the edge of the weed.

I waded back towards the bridge but did not get a bite for more than hour. About 60 metres from the end of the old oyster jetty, I felt a grab, but I did not hook up. I cast back in the same spot six more times – slowing my retrieve down to a crawl. On number seven…. thud. I dropped the rod tip and slowly counted to ten. When I lifted it, I felt the hook slide home and I had a flathead on the line. This one was a keeper, about 45cm, but I was releasing everything today. It was just before 8.30 am. 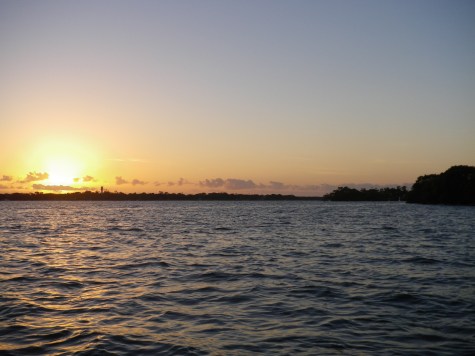 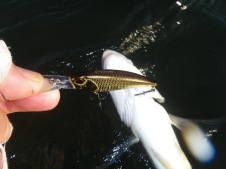 Even the little ones chase the DUO Realis Shad 59MR

The GULPs paid off today

It was still and calm close to the shoreline

It soon turned around when it got close

Lurking in the sandy breaks between the weed 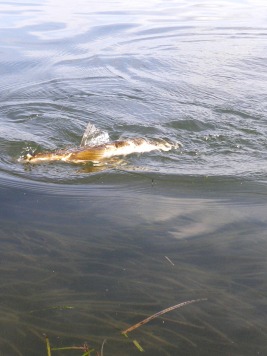 They do not need much water 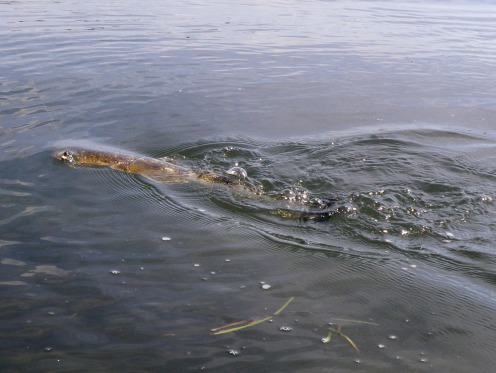 The best fish of the day – about 60cm

This was the most productive area today 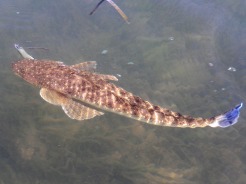 Five minutes later and ten metres closer to the jetty, I found another slightly bigger one. Just before 9.00 am, I cast into the shallows – between me and the mangrove lined shore and the line went tight, immediately. It was the best fish of the day, about 60cm long. It was diminishing returns from then on. I caught two more fish, but both were around 35cm long.

By 10.00 am, the wind was blowing hard and I had Christmas shopping to get on with, so that was it for the day.