Saturday morning was clear, but hot and humid. I set off for the Bribie sand flats at about 3.30am and was wading out in the pre-dawn light, just after 4.30 am. Low tide was due at 4.58 am. Then it would be another big run in tide – getting up to 2.3 metres.

Pre-dawn there was virtually no breeze but the wind had been a fairly persistent northerly the day before and was forecast to pick up again later. On the still water, at the bottom of the tide there were clumps of seagrass everywhere. The big tides have been lifting it up and spreading it all around. This always makes the fishing tricky. As soon as your lure lands it starts collecting seagrass.

At 4.45 am, I caught my first flathead of the day on a Gulp Orange Tiger 5” Jerkshad soft plastic. Just to the north of the old oyster jetty on the mainland side of the Pumicestone Passage. It must have been lurking in a sandy depression. I could not find any more in this location, so I waded further south, while I waited for the tide to start running in.

The weed got worse as the tidal flow picked up. I was restricted to casting into patches of weed free water, which meant I could not really put my lures where I wanted them to be.

After an hour of frustrating fishing I thought I was attached to another clump of weed, but suddenly it started wriggling. It was another flathead about 50cm long. It had felt much bigger.  I swapped to a smaller GULP 2” Shrimp soft plastic and after another 30 mins I caught another slightly smaller flathead.

First fish of the morning – hiding in the weed 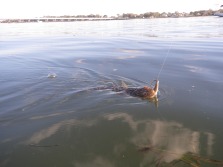 Every fish came with a clump of weed

Huge clumps of weed made the fishing difficult 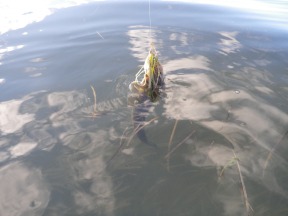 This why I wear waders

I continued to battle the weed but decided to wade back to the bridge. The tide was running in fast and I disturbed a few small flathead in the shallows. The northerly winds had brought the usual herd of blue jellyfish the stingrays were everywhere.

At about 8.00 am I reached the bridge. I fought the weed for a few more casts and then gave up for the day.