After an extraordinary session on Friday, I had to get back up to Bribie again to fish the low tide. Fortunately, I could squeeze in a session on Saturday morning. The wind was forecast to be pretty lively again, with a couple of tropical cyclones hovering off the coast, up north. Low tide would be at 8.40 am. The moon was a week away from full.

I arrived just after first light at about 5.30 am. I ran into Matt, another keen fisho who had had the same idea. We walked out towards the old oyster jetty and swapped a few fishing stories. He headed south along the sandbank towards the channel marker and I settled on a spot just to the south of the jetty.

It took a while to find the fish. The sun came over the horizon and the wind started to pick up. The tide was running out quickly. I started by fishing with a GULP Jerkshad in the Satay Chicken on a 1/8th 2/0 jighead. I was using my G.Loomis TJR fast action, light spin rod and a 15lb Super PE braid and 10lb fluorocarbon leader. At about 6.20 am I dropped a small flathead, but on the next cast, I felt the bite and paused. When I lifted, the fish was attached.

Now I had found the fish and I caught a fish on almost every cast for the next 30 minutes.  A hot bite is a great time to experiment. A gent named Charles Talman from Mount Gambier in South Australia makes his own soft plastics and recently was kind enough to send me some to try out. There were plenty of prawns jumping so I decided to start by rigging up one of his 4” Shrimp soft plastics. These plastics do not quite have the finesse of the major brands, but as you will see from the pictures, they are cleverly designed and have good actions and texture – both essential characteristics. I rigged the first one on a 1/8th ounce, 2/0 jighead and cast it out. I knew the fish were here but I wasn’t sure they would go for it. There was no need to worry – half way into the retrieve a fish hit it. I dropped the rod tip and paused. About five seconds later, I struck and I pulled up a flathead, about 45cm long. A few casts later, I caught another. Over the next hour, they kept coming. I cycled through a couple more of Charles’ lures and then put in a GULP 4” Shrimp in the Natural colour. There was no difference in the catch rate between the two types of shrimp soft plastic.

I now decided to try the DUO Tetraworks Koikakko tiny hard bodied squid imitations. These are made with the usual DUO care and attention to detail. They can be used in deep water as a jig or hopped across the bottom like a traditional sinking hard body. They are only 34mm long and weigh 4.6g. They are ideal to cast across the flats in crystal clear water, on light leaders and will tempt almost any species.  I knew there had been a lot of small squid around this area so I thought they would be perfect. My only concern was that perhaps they would be too small for the flathead to notice. I checked my knots and decided to slow everything down and increase the pauses on the bottom.

Success was not immediate, but after about 15 minutes I saw a flathead come up behind the lure and then turn away at the last minute. I cast back in the same spot and left the lure on the bottom for about 20 seconds. On the second hop, I felt the violent thud of a flathead mouth crunch down on my lure. The fish took the lure and slowly swam away with it. It took a while for it to register that this was not an ordinary squid and when I lifted the rod tip to ensure the tiny treble was lodged, it took off.

It was obviously bigger than the small flathead that had swiped at the lure on the previous retrieve and it made couple of blistering runs out towards open water. You cannot muscle a fish with the fast and flexible G.Loomis TJR rod. It absorbs the lunges beautifully but you have to be patient and let the reel’s drag do the rest. I have traded up the single tiny treble hook on the DUO Tetraworks Koikakko for a slightly tougher Gamakatsu version. I waded back to the shoreline with the fish. It was tired now, but as we reached the shallows, it continued to try and turn and then shake its head. I pulled it across the weed in the shallows and on to the sandbank. It was the biggest fish of the day – a 68cm flathead. I released this one and carried on fishing.

The Koikakko lure caught plenty more flathead and its tiny size did not seem to have much bearing on the size of fish it attracted.  By low tide I had five good fish in the keeper bag – all between 50 cm. and 60cm.

By 9.00 am, the wind was howling and making it pretty hard to fish. I decided to finish the session with a couple more of Mr Talman’s soft plastics. I particularly like his small, three legged monster – not sure what it is but the flathead love it. I lost the green version to a fish that wrapped itself around an abandoned crab pot.  Fortunately, there was also a fluorescent gold/creamy coloured one, so I re-rigged with this. The flathead could not resist and I caught about 5 more, all good sized fish, on this soft plastic lure. I finished up with a 5” worm in a green colour. This also delivered and after a few casts it connected with a 50cm flathead.

GULP Satay Chicken gets the first one

A flathead takes off

Talman shrimp does the trick 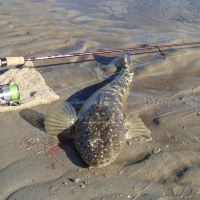 Best fish of the day on a DUO

I am not really sure why the fish have suddenly appeared but I hope they hang around for a while. I’ll be back.