I am disappointed to report that once more the curse of paid employment has slowed down my posting and fishing. If the current government has its way, I shall be doing more work, for a lot longer than I had planned. I understand that when the pension was first introduced around 1910, the qualifying age was 65 and life expectancy was 58. So it was the ultimate healthy lifestyle bonus. Rarely did the government have to pay out for more than a few years. Now, most of us will get to our mid 80’s (especially if we eat plenty of fish). So we nearly all qualify for some portion of state funding for 15 years or more. Someone has to pay for it and the woeful performance of most people’s superannuation fund managers, means they will not be making much of a contribution. It’s a mess and it can only mean one thing – the current Australian age pension is probably as good as it will ever be.  So next time you see someone with more grey hair than you, whingeing about the cost of bait, remember you will be working long after they put their feet up, so ask them to shout you a beer. Of course, I can’t imagine who will employ me when I am 65 but that’s a whole another can of worms.

That’s enough social commentary. I was keen to see if the flathead glory days of early March would return. I drove up to Bribie on Monday, to fish the run out tide, which would be low at 8.00 am. It was still school holidays and during my last few visits, there has been plenty boat traffic. The wind has been changing between a light south-easterly and a northerly, with the occasionally cool westerly appearing, in the early morning. On Monday, it was light and cool from the south west. The overnight westerlies will start to bring the water temperature down quite quickly, if they persist. We were about half way between the full and the new moon.

I started in the dark and decided to head straight to the area to the south of the old oyster jetty, on the mainland side of the Pumicestone Passage. My last few sessions through the Easter Holidays had produced some quality fish, but the numbers were thinning out.  I decided to fish with neutral/ natural coloured soft plastics, just in case the fish were getting picky. I started with a GULP 2” Shrimp in the Peppered Prawn colour. I loaded it on to a 1/8th ounce, 1/0 jighead.  It was 5.30 am and the sky was just beginning to turn orange along the horizon. I cast the plastic a long  way out and after two hops, I felt a good bite. Then the line went slack. I wound up the slack and suddenly, I was in contact with a fish again. It was swimming towards me but now it turned away. As it pulled away, the hook struck home and it took off with a blistering first run. I gradually subdued it, but it was powerful and angry and this area has a big patch of rocky bottom, close to the shore, so I took it slowly. After a few minutes, I pulled the fish on to the sandy beach. It was a big female, just under 70 cm. After a few pictures, I let her go. 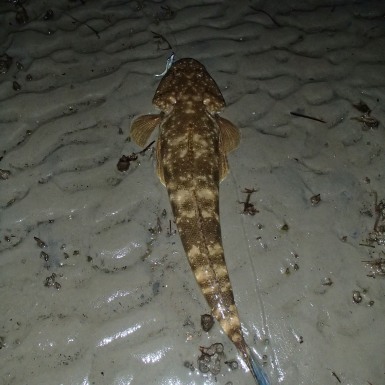 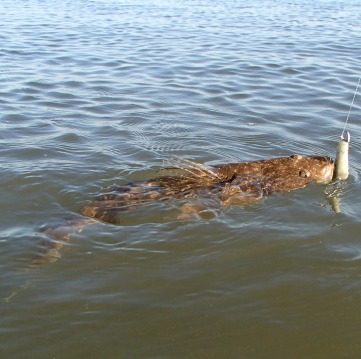 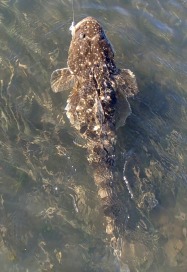 The sun came up and I waded further south, following the falling tide. It was pretty quiet and it was not until 6.25 am, that I got another bite. I had swapped to the GULP 2” Shrimp in the Banana Prawn colour and hooked another slurping, grunting, spiny puffer fish. I pushed it off the hook and continued fishing. I then caught a couple of undersized flathead in quick succession. Then things went quiet again. I swapped to a longer GULP Jerkshad in the Peppered Prawn colour and this soon attracted a few bites. About 10 minutes after the change, I caught a big (35cm) pike. I was now about half way to the green channel marker.

The water slowed and I turned back towards the jetty. At about 7.20 am I caught an almost legal size flathead, which I released. It was getting frustrating. By low tide at 8.15 am, I found myself back beside the old oyster jetty. I had swapped back to the Shrimp in the Banana Prawn colour. I put in a few last casts and then bang, a big fish grabbed the Shrimp soft plastic, just as it landed. The fish was lying in no more than 20 cm of water. It was big and powerful and as it was so near the surface, it immediately started shaking its head. It ran hard but after about four good runs, it was spent. I waded through the soft muddy weed and pulled it ashore. It was another 70 cm model, or perhaps it was the one I caught earlier. It looked a very different colour in full daylight, but you never know.

I had caught some good fish but I had released them all. It may be time to fish somewhere else for a while.