Wednesday afternoon was my next free spot for a quick session and I drove up to Bribie to fish the run out tide. I wanted to fish today to see if the New Moon made any difference. It would be a 0.4m low tide, at about 3.00 pm. A 10 knot northerly was forecast but when I arrived, at about 1.15 pm, it was more like a 15 knot south-easterly.

I waded out to the south, under the bridge towards the old oyster jetty. The water was stirred up from the wind and the big tide, but there was not too much floating dead weed and sea grass around. I started with a DUO Realis Shad 62 DR, a small floating hard bodied bibbed minnow lure.

At this point I thought I would clarify that Landangler is not sponsored by anyone and does not own shares in BERKLEY GULP, DUO, RIO, MARIA, LUCKY CRAFT or any other lure manufacturer (although I probably should). From time to time (very rarely) manufacturers send me a few lures to try. If they look like they might work for the type of fishing I do, I will give them a try and see if they catch fish. If I do try them, then I will write about the results – good or bad.  But I will always let you know if I did not have to pay for them. This approach is not always welcomed and I often receive a package only once!

I read a great blog post by Adam Royter, a few weeks ago – it is worth a look, if you have time – http://www.maddogroyter.com/1/post/2014/04/the-truth-be-told.html . I was impressed that he was willing to bite the hand that feeds him by pointing out how disappointingly predictable reviews in Australian fishing magazines have become. I appreciate that the fishing industry is small here and that the ‘pay for advertising in return for a positive review’ model has become normal practice – but that don’t make it right.

Landanglers prediction is that only good quality, current, unbiased content will get read in the future and most of it will not get read in the paper format. Like it or not, the younger generation consider web content as free, so if you want to get paid in some way to be a fishing journalist, your product will need be exceptional and that is how it should be.

Right, it’s time to get off the soap box and get back to the fishing. I tied on the DUO Realis Shad 62DR (purchased with hard earned cash from Tacklewarehouse at Camp Hill – http://www.tacklewarehouse.com.au/). The tide was running out quickly and I was now standing about 30 metres to the south of the old oyster jetty. After about three casts, using a fairly fast, constant retrieve an angry flathead surfaced with the lure lodged in its mouth. It was a good sized fish – about 55cm long. A few casts later, the same lure caught a slightly smaller one. 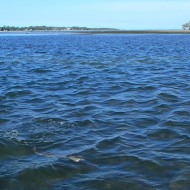 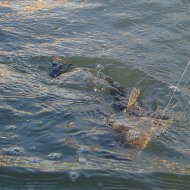 Then things slowed a bit. As the tide got lower, more and more weed started to clog the lure so I swapped back to a soft plastic – the GULP 4” Minnow in the Smelt colour. This found the fish pretty quickly and I caught another 3 small flathead over the next 30 minutes.  I waded a long way towards the green channel marker and caught one more 45cm flathead before turning back.

Just before 4.00 pm I made my way back towards the bridge and stopped to cast a few shots in the area just to the north of the jetty. I had now swapped to the GULP Crazylegs Jerkshad in the Curried Chicken colour. This produced another couple of small fish.

It had been another good session with plenty of fish around. They were all released today, so go and catch them again.