I am ashamed to admit that January to March 2015 has been a fishing black hole as far as the Landangler Blog is concerned. I apologise to those of you who check back here regularly for a fishing fix.

Once more the irrational requirements of modern society – funding for food, clothing and shelter – have diverted me from the most noble of pursuits. I have fished a few sessions at Bribie since returning from 1770 in December, but I have largely been overseas working.

As usual, when you increase the time between fishing sessions it gets much harder. You lose track of which tides work best and where and when the fish are feeding.  You lose your touch with the rod and start to forget what a snag feels like and what a fish feels like. Fishing is often a process of elimination. If you fish in one general location for three or four sessions in a row, in a short time frame, you get a far more accurate idea of what works and what does not. So the moral of this story is fish as often as you can!

In late December 2014 I had a couple of session on the flats beside the old oyster jetty at Bribie and caught a few flathead on each occasion. There were always flathead lies under the bridge after the big night time high tides and because there had not been much rain, up to that point, the water was fairly clear. The GULP 4” Minnow in the New Penny colour proved successful as did the 4” Minnow in the Pearl Watermelon colour. I rigged both on 1/8th ounce, 1/0 jigheads with a 10lb fluorocarbon leader and I was using my light spinning rod and reel combination. 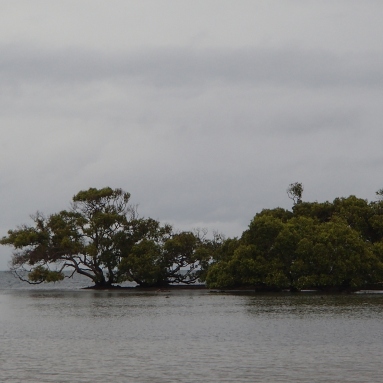 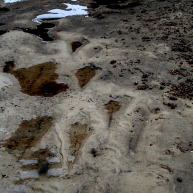 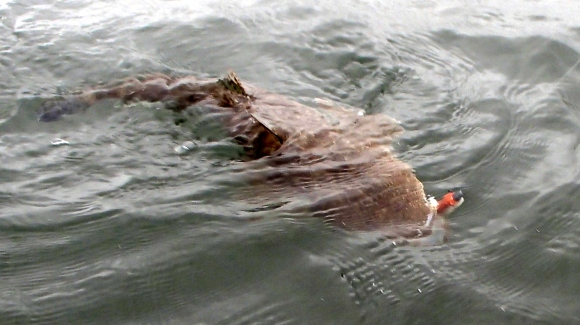 My next session was a beautiful morning in early February. Conditions were good with an early morning run out tide and a light south easterly wind, but I fished the same area for dismal results. There was no evidence of bait around and no lies under the bridge lights. I fished from pre-dawn to low tide with all sorts of soft plastics and hard bodies. The only thing I caught was a tiny foul hooked whiting. At low tide it was very clear that the consistent summer wind pattern of early morning south easterly followed by afternoon northerly had flattened out the terrain quite considerably. This could also be a result of the cleared area where the new resort is being built creating a wind tunnel.

My next session was early March on Red Beach at Skirmish Point, on the southern tip of Bribie Island. I fished the last of the low tide on a beautiful hot morning. I did not start until after 9.00 am and stuck with a light leader and 1/8th ounce, size 1 jighead. I was using the ‘dart slayer’ soft plastic – the GULP 3” Minnow in the Lime Tiger colour. This plastic seems to really work well off the beach. After a few casts I hooked, then dropped, a small flathead. I found the point where the current flows from either side of the island meet and started casting in to it. I could see plenty of small garfish schools and every now and then something would send the schools of smaller bait flying in all directions. The soft plastic lure was getting bumped and snapped at and I soon caught a small dart and then a bigger dart. The next taker was a tiny chopper tailor. They continued to nibble but I did not get any more and left when the tide turned. 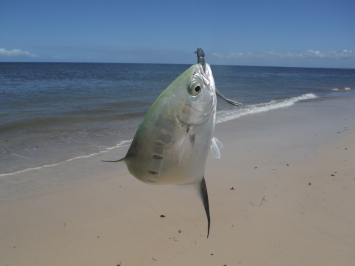 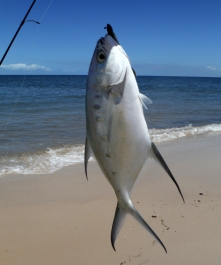 In late March I returned to the same spot at about the same time of day with almost identical results. My cousin was visiting from the UK and I was keen to put him onto a fish or two. A great gutter had formed along the beach at Skirmish Point. At its mouth there was constant activity with garfish and other small bait schooling up. There was virtually no breeze, but the tide was coming in this time. I caught a small dart and half an hour later I was delighted to see cousin Joe land a feisty bigger dart. That was it for the day.

Hooked up on a Skirmish Point dart

That’s a quick round up of the story so far this year. I hope to be posting more regularly now – sharks permitting.