On Wednesday the forecast was for light winds and a clear day. I could not resist another spell at Bribie on the sand/ mud flats, on the mainland side of the Pumicestone Passage. Low tide would be in the middle of the day at 12.36pm.

The wind had dropped off significantly from the day before but it was now cooler and coming from the south west, at about 10 knots. The sky was clear and so was the water. As I walked out under the bridge a couple of Kiwis arrived, one with a fly rod. I politely explained that there were no trout to be had here. I reckon it’s hard enough catching a fish with a regular rod but it seems there is always someone looking for an additional challenge. At least with the wind behind them they were in with a chance.

It was about 9.45am and I started off casting into about 60cm of water, just to the north of the bridge. The tide was running out fast over the weed covered boulders that dot the gravel bottom, in this area. I was fishing with a GULP 4” Minnow soft plastic in the Lime Tiger colour loaded onto a 1/8th ounce, size 1/0 hook jighead. I was using my light spin rod with 10lb fluorocarbon leader tied on to 12lb braid. The first flathead was lying amongst the boulders about 10 metres north of the bridge. It grabbed the plastic and I landed it safely. It was about 44cm long.

I moved south under the bridge and waded under the old oyster jetty, casting as I went. The jetty now has a selection of fairy lights hung along it and a railing down one side. I hope the fairy lights will attract more bait.

I fished around fairly thoroughly in the area just north of the jetty but did not get any bites. It was about an hour before I found another flathead. Just to the north of where the big drain empties out into the main channel. By now I had swapped to the GULP Crazylegs Jerkshad in the Curry Chicken colour. This soft plastic is a Jerkshad with a prong shaped split tail which flutters as it hops and sinks. It is a great lure. Its only problem is that dart, bream and other small fish often bite the tails off. I cast it out beyond the dark edge of the weed beds and paused for 10 seconds. I slowly hopped it back along the bottom. After a few hops a felt the solid thud as the fish hit it. I dropped the tip and counted slowly to 10. I lifted again and hooked the fish. It was another 45 cm flathead. 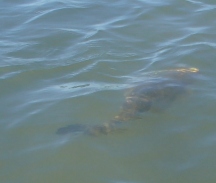 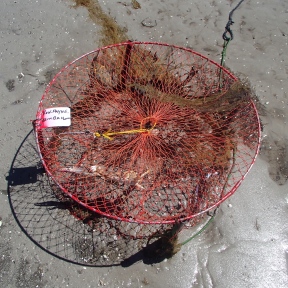 I carried on wading the south and fishing with the big GULP Crazylegs Jerkshad. I soon found a couple more under sized flathead and released them. At about 11.00 am I was halfway between the jetty and the green channel marker, standing about 3 metre back from edge of the weed beds. I had hooked another flathead and was taking a few photographs of it, as I reeled it in. It suddenly got very animated and started leaping out of the water. As I pulled it closer a sanding coloured shape loomed up on its tale and I understood its concern. It looked like a big wobbegong, about 1.5m long, but its more pointed nose and uniform colour suggested it was some other kind of shark. When it saw me it turned away and decided not to pursue its lunch.

I carried on towards the channel marker and caught 3 more keeper sized flathead and another 4 undersized fish, which were all released. At about noon the tide had slowed and I decided to give up. Another bagful of flathead and a great morning of fishing.