Friday would be my last chance to fish the beach in Muscat, Oman. I woke well before dawn and pulled on my back pack. It is always difficult to know what types of lures and leaders to bring to a previously unknown fishing spot. I brought a packet of mixed GULP 3” Minnow soft plastics in various colours, a packet of GULP 4” Minnows in Lime Tiger, a packet of GULP 4” Swimmows in the Peppered Prawn colour and a packet of mixed coloured GULP Jerkshads. I also had 1/4, 1/8th and 1/6th ounce jigheads and 6lb, 10lb, 16lb and 30lb fluorocarbon leader. I packed three Maria MJ Twitch small hard bodied minnows in different sizes and a few bigger DUO Realis Jerkbait hard bodied minnows.

On Friday I walked in the opposite direction along the beach, past the Al Ghubra market and a big camp of tuna boats. The beach was pebbly with patches of sandy bottom and I could see some rocky structure beneath the waves. After about 600 metres I crossed the mouth of a shallow wadi. 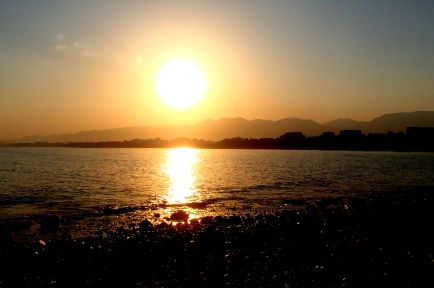 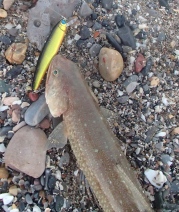 I had been fishing all the way along with a GULP Minnow with no luck. Now I decided to swap to a small MARIA MJ twitch suspending hard bodied minnow. I could cast this a bit further out, beyond the wave break. This soon stirred things up and after two or three retrieves I was on to a fish. It was another grinner/ lizard fish. I had seen these in the market, so they obviously eat them here. At home in Queensland, they are pretty much considered to be only good for bait. I let it go and cast out again. I had obviously found a solid school because for the next 30 minutes I caught grinner after grinner. I swapped to a GULP Swimmow in the peppered prawn colour, but this just caught a few more grinners.

It was now well past sunrise and I was moving back towards the Chedi resort. I had tied on a heavier, 1/6th ounce jighead and loaded a GULP 3” Minnow in the New Penny colour. I cast this around leaving it for long pauses on the bottom. After a while I felt another good bite and paused. When I lifted the rod tip the fish was hooked. It was another flounder, but a much bigger one. I decided to keep it. I dispatched it and put it to one side. The soft plastic was all mashed up so I put on another GULP Swimmow and carried on casting. I had found a good patch of flounder (or goat fish as the locals call it). I caught about four more and released them all.

I wandered back to the Chedi, where a helpful waiter arrived with a plate and whisked the still flapping flounder off to the kitchens. I had a shower and made my way to breakfast. The fish was cleaned, filleted and grilled and arrived at my breakfast table with some fresh lemon, olives and hummus.

I had loved visiting Oman and was delighted by the friendly people and the beautiful scenery. It is a Muslim country but I never felt threatened or uncomfortable. The Ibadi Muslims who are the religious majority, preach tolerance and respect for other religions and cultures.  It is a pocket of calm in a troubled part of the world. I hope it stays peaceful and I will get the chance to come back.