Thursday’s fishing had not been that great but when I woke up on Friday I was confident that the fish would be there. The moon was virtually full and it would be a big high tide at about 8.30 am. More importantly the wind had dropped off considerably.

I decided to fish the first half of the run out tide at Whitepatch on Bribie Island. On a big tide the water comes right up to the tree line and the fish will often move up with it. There are often good whiting in the shallows here and where there are whiting there are usually flathead.

I started at the north of end of Whitepatch beach, fishing with a GULP 3 inch Minnow in the New Penny colour. I waded off to the north casting in the direction of the outflowing tide and then hopping the lure back towards me. I soon caught a tiny flathead that was sitting right next to a ledge of coffee rock at the foot of the tree lined beach. When I cast the lure out further it was grabbed a few times by what I think where the cruising long toms. I fished for about two hours but could not find any more fish.

At about 11.15 am I moved down to the old oyster jetty flats. The tide was still fairly high so I waded along close to the mangrove line, casting out towards deeper water. I was now fishing with a GULP Jerkshad in the Satay Chicken colour on a 1/8th ounce, 1/0 hook jighead. The wind was picking up and there was lots of weed floating around. The tide was running out fast and by about 12.30 pm I was about 30 metres to the south of the old oyster jetty. I felt a solid bite and hooked a nice 55cm flathead. When I pulled it in it had a nasty scar on its back. 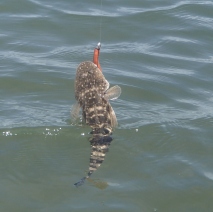 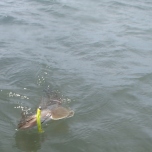 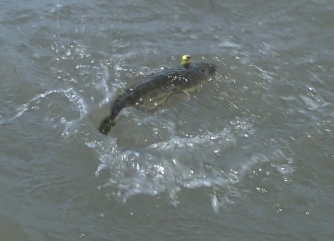 I carried on towards the channel marker and about 40 minutes later picked up another 45cm flathead. As I moved south I caught two more, a 48 cm and a 50cm in fairly quick succession. By 2.00 pm I was hot and knackered and the wind was really blowing so I decided to give up. It had been a long session but I had found some decent fish.