In early July I found myself in the UK and my father (a keen fly fisherman) invited me to join him for an afternoon of trout fishing on the River Loddon at Strathfield Saye  http://www.stratfield-saye.co.uk/  – the Duke of Wellington’s country estate. The estate was gifted to Wellington in 1817 to thank him for giving Napoleon a bloody nose at the Battle of Waterloo. More recently the cavalry scenes from the film Warhorse were filmed here.

The River Lodden is actually a tributary of the Thames that runs through Berkshire and Hampshire. It rises near Basingstoke and runs through a mixture of agricultural land and urban landscape before reaching the Strathfield Saye estate. In days gone by it supported a number of mills along its course. The river is carefully managed by a River Keeper and anglers pay an annual fee to fish it on dedicated days through the trout fishing season which runs from 1st of April to the 30th September. On the estate the river is stocked with both rainbows and browns but also contains a variety of coarse fish including carp, chub, tench and roach.

On the estate the river is divided into about 6 ‘beats’, each about a half a mile long. The anglers, who pay an annual subscription for a ‘rod’ typically have access to the river one afternoon per week and rotate through the beats. On Thursday we were fishing the Duke’s beat. Each beat has a small hut to shelter anglers from the highly variable English summer weather. The rules are clear; only up stream fly fishing with dry fly or nymph is permitted with a bag limit of four trout per angler/ day. All coarse fish must be returned. My GULPS would not be welcome here!

I have not fly fished for a while but it is like riding a bike. The challenge on a tight stream like this one is to avoid losing your flys in the foliage on the back cast. We were using a four pound breaking strain fluorocarbon leader and I started with a grey wolf fly. Consistent rain over the previous few days meant the water was not very clear. It was also fairly cold with the forecast high being about 15 degrees Celsius.

My father walked me the length of the beat pointing out the key features in the riverbed. The stream meanders through the estates fields and the banks are planted with a mixture of mature weeping willows and the odd majestic oak or ash. The river is carefully tended and the banks are dug out and replanted from time to time to ensure good water flow and the right mix of vegetation. Much of it was only about 50cm deep on the day we were fishing but at various bends there are metre plus deep holes to give the fish cover.

The stream is stocked before the season starts with a mixture of juvenile brown and rainbow trout. Most of the fish are removed over winter when there would not be adequate food to support the population. Some of the bigger fish avoid being stunned and removed at the end of the season and these veterans survive year round in the river. The typical fish is between two and four pounds in weight but there are a few monster eight pounders lurking in the shadows. 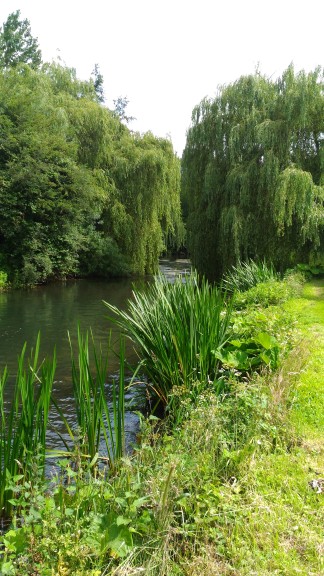 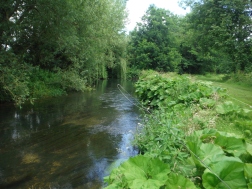 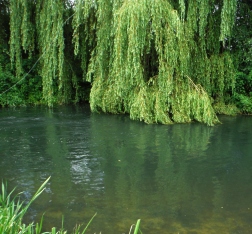 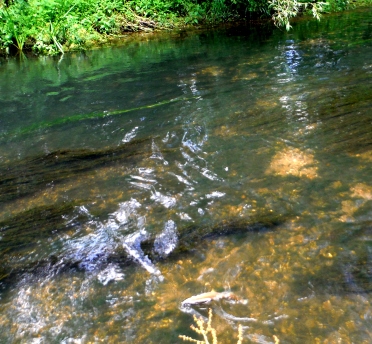 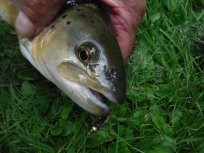 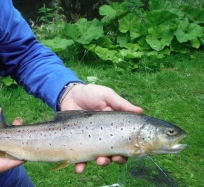 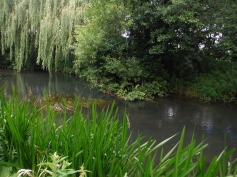 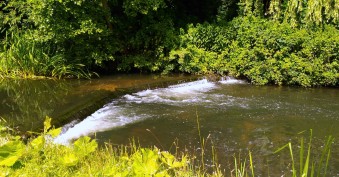 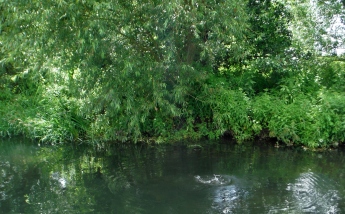 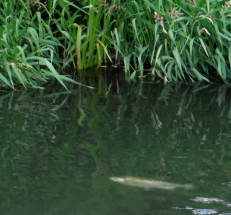 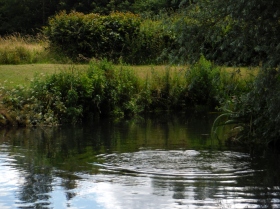 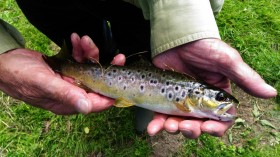 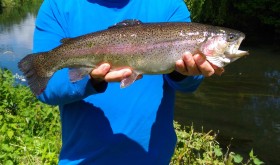 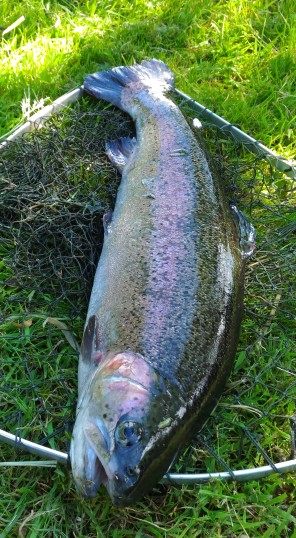 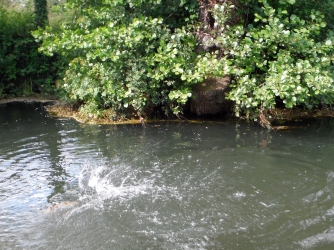 I got my casting technique sorted out on a fairly open stretch of river bank. It took about 30 minutes to remember that it is all in the wrist and timing is far more important than power. As I became more confident I found a good looking patch of shade over some slow moving water under a willow and cast up into the current. After a couple of tries the fly land where I wanted it and sure enough I saw a decent swirl as a trout came after it then turned away. I cast a few more times but it was not interested.

My father caught a nice two pound rainbow trout further down the beat. I decided to swap to a slightly heavier brass headed black nymph fly with a strand of blue in it. I found another patch of shaded slow moving water and put in a few casts. I was retrieving line fairly slowly when a fish swept in form the side and the line pulled tight. My first instinct was to wind and rely on the drag but when fly fishing you actually release line through your fingers and try to let the rod deal with the lunges. The fish was nicely hooked and my father appeared to provide some expert guidance:” No towing, keep the rod tip up……”. After a short fight I had it on the bank.

I carried on moving along the beat and hooked another fish about thirty minutes later. I was too eager and hurried it towards the net only for it to pull away and snap the leader. I tied on the only other fly I had in my pocket that happened to be a brass headed pheasant tailed nymph. I think this is the fly that almost everyone starts their fly fishing career with. It is a wet fly (sinking) traditionally made from the pheasant’s tail feathers and can be heavily or lightly weighted.

By now the sun had come out and it was a beautiful summer afternoon. I found another good spot beside some reeds and started casting. It did not take long to find another fish. This time it was a good sized brown trout that slammed into the fly on about my fifth cast. I played the fish carefully and patiently. I made sure it was tired out before I put the net beneath it.

We continued fish until about 2.00 pm by which time we had four good fish and gave up for the day.