I drove up to Bribie, arriving at about 9.30 am to fish the bottom of the tide. I chose the old Bribie oyster jetty flats, in front of the new Sandstone Point Hotel.

The wind had started as a cool 10 knot south-westerly before changing into to a 10 knot south-easterly at about 10.15 am. Low tide would be at 11.20 am. I was fishing with the superfast tipped G.Loomis Trout rod, 12lb fluorocarbon leader and a 1/8th ounce,  1/0 jig head.

The tide was a fair way out when I arrived and so I started off by fishing along the inside edge of the new floating pontoon. I tried a small GULP 3” Minnow in the Pearl Watermelon colour. I had walked out on to the pontoon a few weeks before and seen plenty of baitfish that were about this size, so it was a logical choice. I moved from one end to another cast right up to the edge and let the soft plastic flutter down in the shadows. There were no takers.

I moved to the south of the jetty and started casting. On about the third there was a solid bite, run and the leader snapped. I realised I still had the 6lb fluorocarbon leader I had been using for King George Whiting a week earlier. I changed up to 12lb leader and carried on moving to the south. 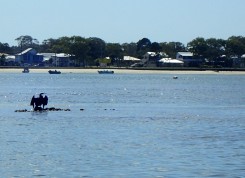 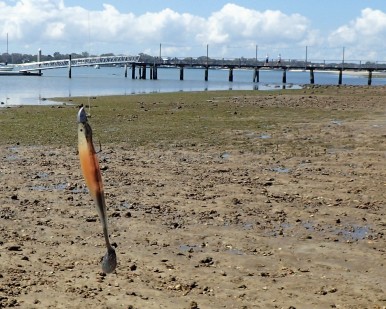 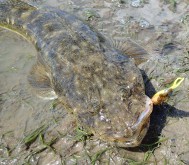 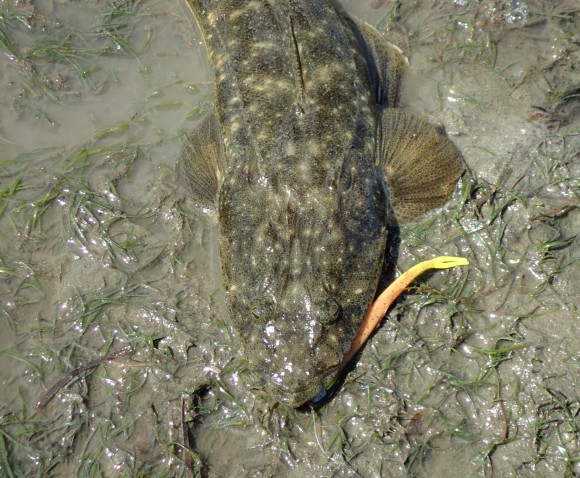 I put on a Lucky Craft Mad Scientist Paddle tail soft plastic lure. I cast all around the sandy patches where the water drains round the corner from Sandstone Point and suddenly got thumped. The fish set off for deepwater, initially moving fairly slowly. Then it turned its head, realized it was hooked and started shaking its head. It was a powerful big lady flathead and it took about 10 minutes to subdue. By lining it up next to the rod I could see it was over 70 cm so I let it go.

I carried on moving to the south and caught three more flathead on the GULP Satay Chicken Jerkshad. The biggest was 54cm long and the smallest was 42cm. By about 1.00pm I was hot and thirsty so I headed back to the car.