Monday had been pretty good so I decided to go back up to Bribie on Tuesday morning. Low tide would be about an hour later, at 10.30 am. There was not much tidal flow as the moon was not really doing much. This time I chose the oyster jetty flats on the mainland sided of the Pumicestone Passage.

It was another hot, clear morning but with a little more northerly wind, when I arrived at about 8.00am. I was still fishing with my short, fast action G.Loomis trout rod and 10lb fluorocarbon leader. I tied on a 1/8th ounce, size 1/0 hook jighead and put on a GULP 4” Minnow soft plastic in the Pearl Watermelon colour.

I was just south of the bridge and once more the first taker was a long tom. These fish are tricky to hook. They have plenty of teeth and usually the bigger ones thrash around until they slice through your line or shake the hook loose. This on managed to wrap the light line thoroughly around its snout. I untangled it and released it.

I moved south and swapped soft plastics to a GULP Cajun Chicken Jerkshad. This black and pink lure seems to stir things up sometimes probably because it is such high contrast. I was now well to the south of the old oyster jetty. I felt a slid thump, dropped the rod tip and paused. When I lifted it the fish was on and the hook pushed home. It took off and felt like a pretty good flathead. It later measured 58cm. I took a few underwater shots with my new camera. This is a fairly hit and miss operation when you are not swimming with them! 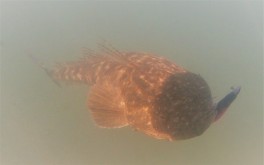 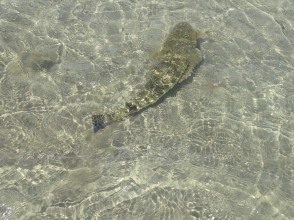 I carried on moving south and caught another 30 cm flathead about 3 casts later. After another 30 minutes I swapped to a GULP Satay Chicken Jerkshad and not long afterwards I caught another 50cm plus flathead. As the tide stopped running the action slowed. I caught three more smaller flathead before giving up at about 11.00 am.