In the interests of catching up and giving you a feel for what I have been catching over the last few months, I am just going to post a few monthly summaries, so here goes.

In the rest of October 2016, I fished on four more mornings at Bribie – favouring the run out tide. I put in a total of about 14 hours, mostly on the flats in front of the Sandstone Point Hotel but also in front of the museum at Bongaree. It was hard work and I caught only two keeper size flathead at each session and nothing else. The wind was mostly light around dawn and then building to a stronger north or north-easterly by about lunch time.

I fished with my usual assortment of soft plastics including Gulp Jerkshad and Minnow patterns and sometimes I tried my beloved DUO Realis series hard bodied minnows. I caught everything on a 10lb fluorocarbon leader and used mostly 1/8th ounce, size 1 hook jigheads. 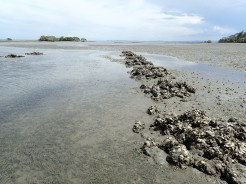