September saw my first serious explorations of the coast around the Brunswick River mouth in Northern New South Wales. The river itself holds plenty of fish but it is a very busy recreational spot so at the weekends it is hard to find an undisturbed stretch to fish. I managed to find a few small flathead and bream amongst the oyster leases near where the Pacific Highway Bridge crosses the river. In the run up to the new moon there were large schools of mullet and bream in the marine sanctuary areas near town. Unfortunately, I saw people fishing for them even though this is a no – take zone. Perhaps clearer signage is needed.

When the water was very clear in the main branch of the river I was dropping down to 8lb fluorocarbon leader to persuade the bream to bite. Every now and then my soft plastic would be grabbed and pulled under a ledge by what I think was most likely and estuary cod.

I also tried fishing around the rocks the rocks on the beach at Wooyung and had a few sessions in Mooball Creek.  I caught small flathead on soft plastics in both these locations but virtually none were big enough to keep. 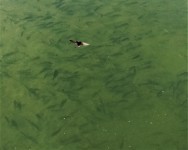 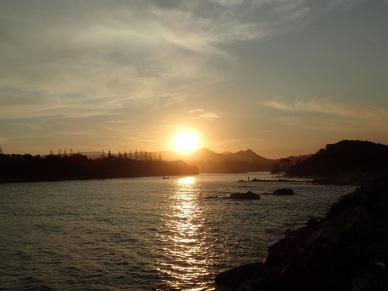