In December Brunswick Heads started to fill with holidaymakers and the river became much busier. I had found the beaches north of the river mouth pretty hard in the warmer weather. There were still dart and whiting around but they were very small. I tried fishing in the few areas of Simpsons Creek where it is allowed and caught a couple more flathead. The bait continued to multiply in the river and big schools of juvenile mullet started to appear. On a couple of hot days, I snorkeled around in Simpsons Creek and took a few photos of the food chain underwater. 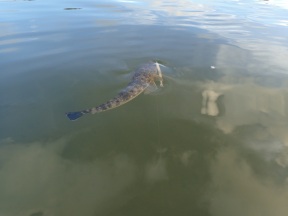 Fishing with the small minnow soft plastics in natural colours worked best. Every now and then, the bait would fly in all directions as schools of small trevally moved through. Occasionally I would catch one but none were bigger than about 25cm long. Down at the river mouth I had some luck catching some better sized bream at the base of the rocks.