I had a quick trip to Western Australia in mid-May. Fortunately I was bunking at the Bunker Bay Resort which is perfectly located to explore and fish the rocky headlands of Cape Naturaliste & Dunsborough in the Margaret River region. I managed to arrive in the calm before the storm and had 4 days of great weather before a major front moved through. This coast gets some wild weather and very big seas. The signs recommending that rock fisherman tie themselves on tightly and the certified and safety rated anchor points sunk into the rocks, are a good indication that things can get pretty dangerous. As always –  take care and if in doubt, don’t.

According to local anglers the Australian Salmon had been working around the bays in the area and there was plenty of bait in close to the shore. I worked my way around each of the bays and headlands looking for anything I could catch. I fished the beach at Bunker Bay. I also fished around the headland at Seal Rocks. I fished in the channels at Canal Rocks and Yallingup. I climbed up the rocks to the ledges beside Sugarloaf Rock, where I saw the odd group of salmon swim by in the crystal clear water below. But wherever I went and whatever I fished with I caught herring after herring after herring. I kept a few of the bigger ones for supper one night and they tasted pretty good. The herring were so plentiful it was hard to fish past them. There were also salmon scales everywhere I went so they must have been around in significant numbers, not long before. At dusk one evening I saw a group of three samsonfish come up behind a hooked herring and I though I was in for a fight but they turned away at the last minute. 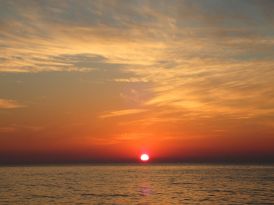 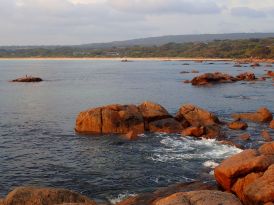 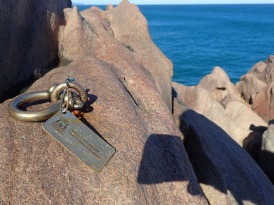 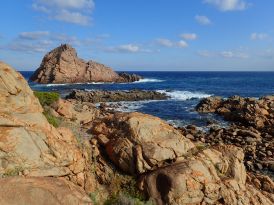 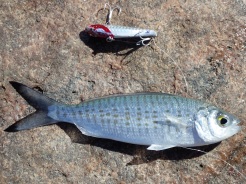 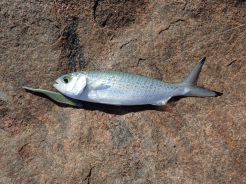 I was using my 4 piece travel rod – a MajorCraft Crostage CRK 964 ML 9 foot 6 inch in their ‘Sea Bass Game’ series. This is designed to cast a 10 to 30 gram lure and is rated as having a ‘regular’ action. It might have struggled to land a big salmon but in this case it was not tested. In fact throughout the four days of fishing I caught only one fish that was not a herring and that was a small trevally, known locally as a ‘skippy’.  I used this rod to cast soft plastics (which the herring completely destroyed), hard bodied minnow and vibe lures, metal slugs and even strips of fresh herring flesh. I generally started the day with a big lure and 25lb leader and gradually moved down in weight of both, as the sun got higher in the sky.

A beautiful spot and plenty of herring – I will be back.