BEST OF THE BREAM 32CM 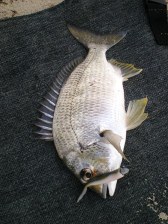 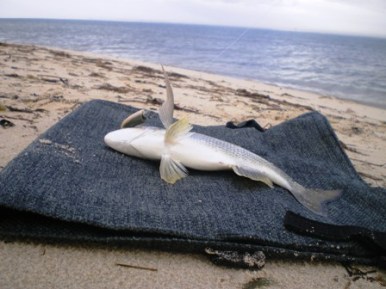 BRIBIE TAILOR ON A SOFT PLASTIC

A SECOND LATER
It was early Thursday morning and although it had been raining most of the night, the wind had died down so I decided to pack the waders and waterproofs and head up to Bribie to see what I could find. At about five o’clock. I had a quick cast under the bridge lights on the island side but there was nothing happening. It was slack water; just on low tide and the rain had stopped. The water was very calm, still and fairly clear.
At about 6.00 am I moved down to fish the mouth of the tidal lagoon at Buckley’s Hole. The Bream still appear to be spawning and this is a spot where they traditionally like to school up. It was now a couple of hours into the run in tide and I think this is often the best time to fish this area. I was looking for Bream but the first taker was a 30 cm Tailor. It hit the lure as soon as it dropped on the first cast. I was fishing the GULP 4” Pearl Watermelon Minnow on a 1/6th 2/0 jighead with 12lb leader. As I dragged it back to the beach you could see it munching its way up the plastic. It looked solidly hooked in the jaw but while I was photographing it, it managed to shake the hook and lure out – Tailor just never give up. I sent it on its way.
As dawn broke the Bream started to bite. I caught a 28cm fish then a couple of throw backs and then a good 32cm fish. I switched down to the 3” Minnow in the same colour and also used a 2” Peppered Prawn Shrimp. I caught about 6 more keeper size fish over the next hour or so and plenty of smaller ones. By about 8.00 am there was too much water to fish over the edge of the coffee rock ledge that runs along there, so I retreated. I had kept three better size fish for dinner and released the rest.