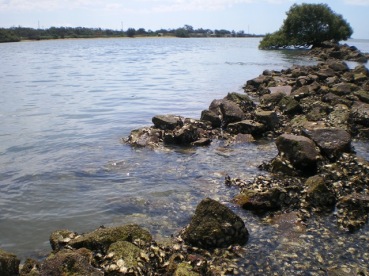 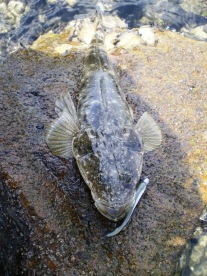 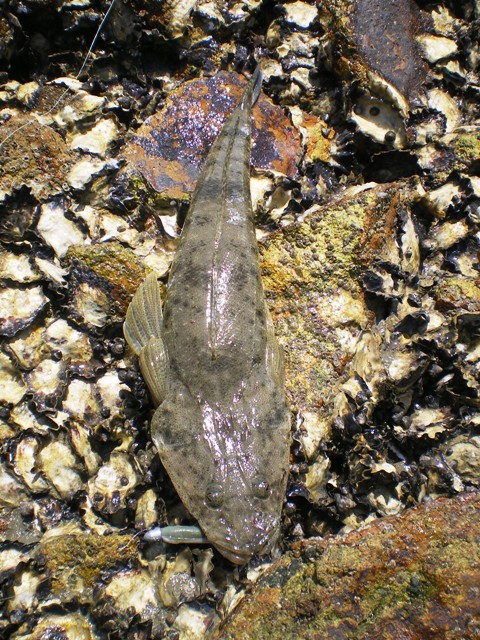 Pinkenba Flathead No.2
Thursday
I only had time for a short fishing excursion today. I checked the tide and saw we had a pretty high high-tide at around 9.00 am at the mouth of the Brisbane River. I could not start fishing until about 9.30 am so I decided to walk out, along the Pinkenba rock wall in search of some Flathead.
You can get access to the rock wall down a small track that runs down to the river side, behind the Queensland Cement Plant, which is next to the Pinkenba boat ramp. I have caught Flathead, Bream and Tailor all along this wall. When the high tide is over 2 metres, as it was today, I like to walk along the wall until the water is flowing over the top of the broken down sections. The tide forms small drains and channels as it runs out and usually, this is where the fish are lurking.
I walked for about 35 mins until I could walk no further. I then turned around to walk back along the wall, casting out on either side and working my lure back along the bottom beside the wall. The tide was now running out strongly. Unfortunately the big tide had made the water a bit murky. I have always found the more natural coloured lures work well in the Brisbane River so I started fishing with the GULP 3” Minnow soft plastic on a 1/6th 1 jighead. I lost a few jigheads to the oyster covered rocks on the river side of the wall and watched a few tiny Bream follow it in – but after an hour I had nothing to show for my efforts.
I turned my attention to the lagoon side of the rock wall. The lagoon sits between the wall and the BP Refinery Tank Farm. It is less than two metres deep, even on a high tide but it has plenty of weed beds that attract the Flathead. I found a break in the wall where the water was running into the lagoon. I cast in a semi-circle, into the eddy that had formed a few metres behind the opening. I felt a few small hits then hooked a 10cm Whiting. I carried on and after a few more casts the lure was slammed by a Flathead, just at the base of the rock wall. I landed him – took a picture and sent him on his way. He was just over 40cm but there is more than enough Flathead in the fridge at present. I carried on in the same spot, peppering the area with casts and after about 5 more I had another Flathead around the same size. I also released him.
I gradually moved back along the rock wall casting as I went but despite changing colours and even trying a blade lure, I did not get another touch from the fish. I arrived back at the car at about noon.