The weather and conditions were perfect once again. Virtually no wind, clear skies and clear water. Unfortunately it was probably a little too clear and a little too calm. I started the day at Double Head, fishing on the north side. I was hoping for another Fingermark but the sun came up and the tide ebbed and nothing much happened. Low tide had passed before dawn, at 5.18 am and now it had just started to come in. I swapped from my heavy rod to my light one. This worked and I caught a small Bream and a very small Trevally.

I decided to move on and try fishing at Emu Park. There are a number of good rocky outcrops along the coast here and I have been told they all hold fish. I had breakfast and by the time I had finished at about 9.00 am, the tide was running in strongly. I walked out on to the rocks in front of the beach boat ramp and looked for a good spot. The problem here is always the tide. It moves so fast that you really need to time you fishing session perfectly. I arrived just as the rocky causeway was getting covered by the incoming water so I only had about half an hour of access to good water. 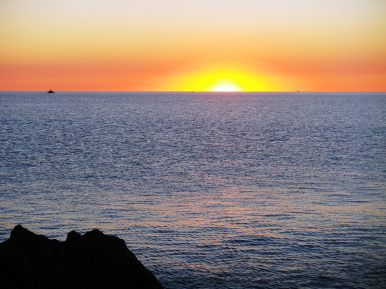 My final Double Head sunrise for a while

A small Bream just after sun up – Double Head

The rocks at Emu Park

Lots of Pike around at Emu Park 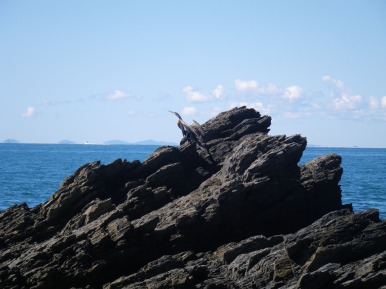 Further along the coast at Rocky Point

GULP Smelt does the damage

I found a patch of Pike and caught about 4 but nothing else turned up, so I decided to move on again. I drove down to another set of rocks called – imaginatively – Rocky Point. There was some fishy looking water in front of these so I went to explore. It was now about 11.00 am and we were approaching high tide. I was fishing with the light rod but I had dropped down to 8lb fluorocarbon leader and a 1/8th 1/0 jighead. When the water is so clear I think you have to fish light. I cast around these rocks and again, caught a few Pike. I was now fishing with a GULP 4” Minnow in the Smelt colour. I dropped it close to a bommy and bang, it was hit as it floated down to the bottom. It was another good Bream, who measured 38cm. The next cast I was hit again but did not hook up. It was now high tide and middle of the day so I decided to call it quits.

Unfortunately just as I was beginning to get to know it, it was time to move on from Yeppoon. I will certainly be back.