A week away from fishing is far too long. I had time for a quick fish on Monday morning, so I drove up to Bribie at about 4.00 am and arrived just after first light at about 4.50 am. The tide was coming in. It would be a 2.3m high at about 9.00 am. The wind was forecast to be a southerly but it seemed to be a cool south-westerly.

A quick look at the flats on the mainland side of the bridge showed that I would be able to fish along the edge of the weed banks, to the south of the (newly repaired) Oyster Jetty, for an hour or so, as the tide came in. It is nearly new moon so it would be coming in fast.

The tide would run in fast

I was fishing with my Loomis GL2 light spin rod again. Unfortunately there was plenty of snot weed around, especially close to the jetty. I started with a 1/8th 1/0 jighead and a GULP 5” Jerkshad in the Curry Chicken colour (red and yellow). I had a 12lb leader on, in case I came across any Tailor. The water was warm but the wind was cold. 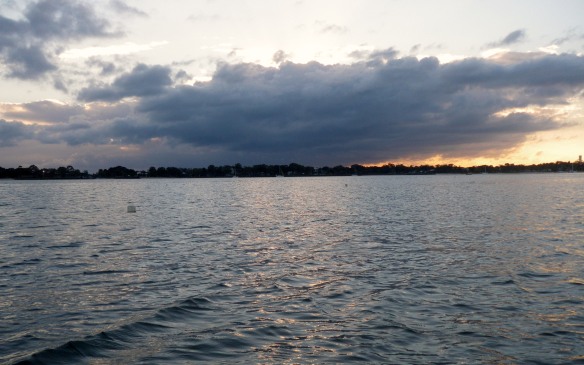 The grey cloud masked the sunrise

The Loomis lets you feel everything the jighead touches and it took some time to get used to it. After a while, I could tell that the difference between a nibble and a jighead stuck in the weed again. Then, about 50 metres south of the jetty, just before 6.00 am, I had a solid bite and the line pulled tight. I was too eager and wrenched up the rod tip, pulling the jighead out of the fish’s mouth. Patience, patience – sometimes you have to go back to the beginning and slow everything down. If it was a Flathead, it was probably still there, or one of its friends was. I cast back in the same spot and after two hops I felt the faintest of bites. I dropped the rod tip and counted slowly to 10, then lifted it sharply. I had it this time. It was a small Dusky Flathead – just about 40 cm long. I let it go, hoping the fishing Gods would reward me with a better fish. 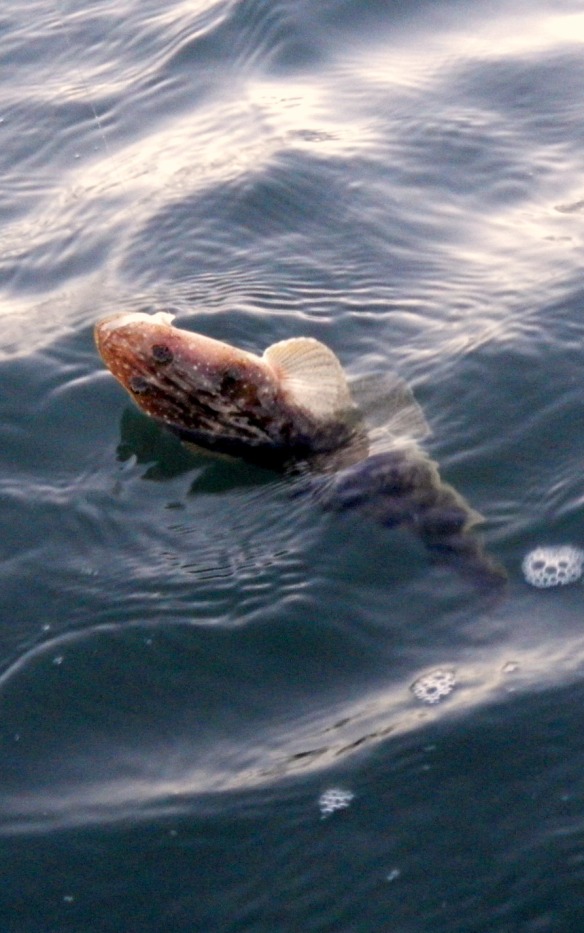 Back amongst the Flathead

Suddenly, there was a big surge about 10 metres away to the north and the baitfish went flying everywhere. Then there was another, about 5 metres further away. I wound in furiously and hurled the plastic in the direction of the splashes. It went quiet for a few minutes and then the same thing happened to the south of me. This time I saw the broad shoulders of a good size Tuna as it smashed into some Herring. I cast where I thought they were travelling but again I could not tempt them – they were moving too fast.

I carried on casting around for Flathead, walking gradually further south. At about 7.30 am I was considering giving up when there was a swirl a few meters in front of me and another bait spray. Then I saw a good size Tuna coming right for me. I thought it would hit me but it swerved at the last minute and the small school flashed by, on either side of me. I was wading in just over a metre of water.

I have hooked Tuna from the rocks and beach but I have never landed one – so this got me really fired up. I have to get back out again soon with some heavy gear and bigger lures! Watch this space