The weather was going from one extreme to the other. On Monday the strong south-easterly had lifted the seas and made things tough. By Friday a howling north easterly was forecast. I managed to find a space for a quick fish but with the wind forecast to be blowing at 30 knots, I wasn’t sure if it would be worth it.

I wanted to have another try with the RAPALA lures I had been sent so I woke at 2.45 am and went outside to see what the wind was doing. In Brisbane there was no breeze at all so I decided to go for it. By the time I reached the rocks at Fingal Head, an hour and a half later, the wind was well and truly up.

I tried to walk over the headland to the rock platform and nearly got blown over. There was no point trying to fish off the rock platform so I had a look to the south for a more sheltered spot. The northerly had completely flattened the swell. I climbed down on to a ledge just to the south of the main platform.

I tied on the RAPALA SXR 14 – a 140mm hard bodied minnow. They describe it as a ‘slashbait’. This just means that it will move more violently from side to side than a normal minnow, but you need to work it, quite aggressively, to achieve this type of action. I had it in the ‘Clown’ colour – red head and yellowish body. I picked the size 14 as it looked like it would be the only one heavy enough to cast against the wind. It weighs 43 grams but with the wind blowing this hard from the north, my attempts to cast against it were fruitless.

The sun was just coming over the horizon and now all I could do was cast to the south and retrieve against the wind. The tide was just past low and would be high at 11.00 am so I was not fishing in much water.

After a couple of casts I felt a really powerful hit and then line started peeling. The drag was set pretty tight but the fish had no trouble stripping line. Initially it went south, with the current and wind, but then it turned north which helped me. I got back some line and climbed down as close to the base of the rocks as I could. It was not a tailor – it was too calm and powerful. I played it for few minutes but still could not get a look at it. Each time I got it towards the foot of the rocks it took off again. Eventually it came into view – a good looking trevally. It was pretty tired now so I used a wave to lift it onto a safe looking ledge and then hopped down and picked it up. It was a very handsome grunting fish, just about 70cm long. After a few pictures, I pulled out the treble and let the fish swim away.

I carried on fishing the SXR 14 and a few casts later it hooked a small tailor. Then all went quiet – except for the wind which just got stronger and stronger. I decided to switch locations and move round to the more sheltered southern side of the headland. There is not much sea bed structure here but there are a couple of large rock pools that are constantly filling and draining. I cast around these with the SXR 14 and then tried an 85g Raider. Neither produced a fish so I decided to swap down to the light rod.

From here I went down to grab it 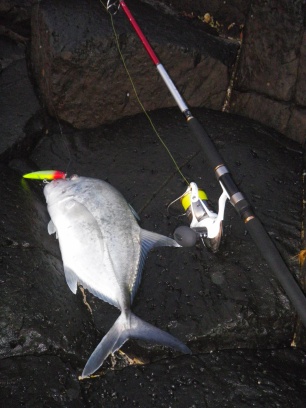 Plenty of strength in the Daiwa Demonblood rod 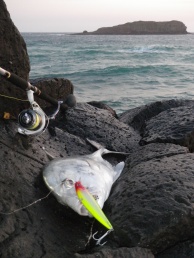 GT – a great fish from a great spot

Tailor will eat things almost as big as themselves

The strong northerly had flattened the sea

Another species for DUO Yurameki

I finished the day with a few bream on soft plastics

I swapped over to the DUO Tetraworks Yurameki lure. This is a small bibless sinking lure. It has a tight action. It weighs 6.3 grams and is 48mm long. Normally it sinks fairly fast but with the wind blowing a big bow in the line, it dropped very slowly. I could see the Bream come up to look at it but they did not strike. I cast around and got a few hits further out. I persisted in the same area, leaving the lure for a long time, to make sure it had reached the bottom before I started the retrieve. After a long wait I lifted the lure for its first hop and a fish hit it. It pulled hard on the light rod and as it came to the surface I saw it was a swallowtail dart. It was a good size and another species notched up on the DUO Tetraworks Yurameki. I threw it back and carried on battling the wind.

I eventually swapped over to a GULP 4” Minnow soft plastic lure, on a 1/6th ounce, 1/0 jighead and this got the bream going. I kept feeling them hit the plastic but could not hook up. Eventually I caught one and then another, and another but they were only just legal size, at about 28cm. The wind was now too difficult to deal with so, at about 10.00 am, I gave up and headed home.