A northerly wind to flatten the seas, a full moon and plenty of bait around the rocks – what more could a fisherman want? A few more hours of sleep, perhaps. Low tide would be at 3.20 am at Fingal Head and that is where I decided to go.

I arrived just before 4.00 am and walked out onto the rocks to find a few good size piles of scales – jewfish scales. The moon was still very bright in the sky. I started with soft plastic lures. I was sure the jewfish would still be around and I am convinced that their favourite food is big Jerkshads. So I started with a big GULP Crazylegs Jerkshad in the Blackshad colour – black and white, with a split curly tail. I was using my heavy rig and cast it out on a ¼ oz, 2/0 jighead hook. I had 30lb leader on.

After a couple of casts I hooked a fish in the half light – a small Tailor about 35cm long. By the time I released the fish, there was only about an inch of the plastic left, I put on a new one and carried on fishing. It was only 4.25 am and the sun had not yet crossed the horizon. I was concentrating on the area at the south end of the rock platform. There has been a big school of small baitfish sitting here for a few weeks and the jewfish have never been far away.

Con arrived and confirmed that he had found some good jewfish the day before – around the 85cm mark. He had caught one on a soft plastic, but had been surprised when one took his Shimano Waxwing hard bodied lure, the previous afternoon. Steve, another local arrived and finally decided to give the plastics a go. His was a cheapy from Kmart which included the jighead. As we were talking fishy rubbish he cast it out a few times, to the south of the rock platform. On about his third attempt a fish grabbed the plastic and took off. After a quick run around it tried to wedge itself under the rocks but Steve played it patiently and let it swim out. He lifted it clear and was delighted with his first jewfish. It looked about 60 to 70cm long and was in great condition.

Now Steve found his rhythm and over the next hour he land two more good jewfish. I was getting just a little jealous and beginning to wish I had never mentioned soft plastics. I had been fishing all through and had had a few bites but could not seem to hook up. I put on a GULP 5” Jerkshad in the Smelt colour and just dropped it straight down beside the rocks and counted to 10. My lure would either be snagged or get a fish and luckily for me, it was the latter. It fought hard initially but I had the heavy rod and it soon tired. With the sea fairly flat I climbed down the stepped rocks to the water and lifted the fish clear. It was another jewfish, just on 65cm.

I continued fishing around that same ledge. I lost a few jigheads and plastics to the rocks and swapped down to a lighter, 20lb fluorocarbon leader. I was now using my old favorite GULP 4” Minnow in the Pearl Watermelon colour. At about 5.50 am there was a tug and then another and then line started peeling. This one wanted to swim out to sea initially and then turned north. I went with it and followed it round to the eastern edge of the platform. It was about the same size as the first and I soon had it up they rocks.

Steve with his first jewfish

Kmart pre-rigged plastic does the trick

My first of the day

I was surprised the leader held this one 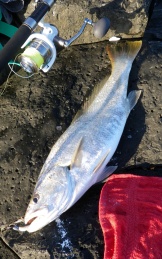 My second fish was much fatter

They love these soft plastics 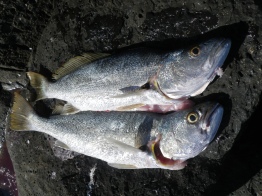 I swapped to a RAPALA SXR 12 for a bit and felt a few knocks from small Tailor but by 6.30am, the jewfish had gone off the bite. I fished on until eight, trying lighter gear but then, with the sun beating down, I cleaned the fish and went in search of a cold drink.