By Monday work was done and I was on my way back to Brisbane. I did have time for a quick stop at 1770. The weather was far from encouraging with heavy rain and persistent strong southeasterly winds. So on Monday morning I trekked round to the stretch of coast between Workman’s Beach and the beach I call Getaway Beach. This area is quite sheltered in a strong southerly. The top of the tide was just before dawn and I tried everything, big and small soft plastic and hard bodies – nothing raised a bite. The water was stirred up and murky and the swell made things tough. Every time I fished with heavy lures, I pulled up lots of weed and displaced rubbish from the bottom. When I fished lighter, I could not keep the lures in the water. After a few hours I gave up. 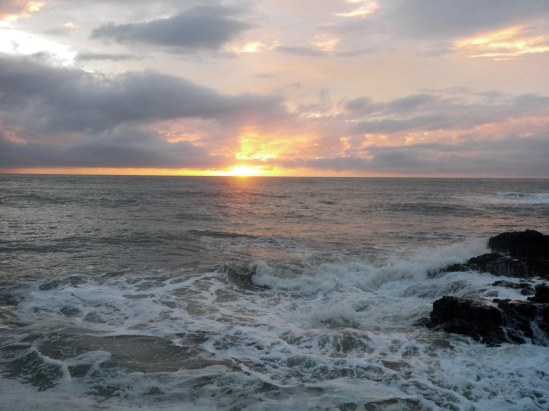 The weather looked good for Jewfish at 1770 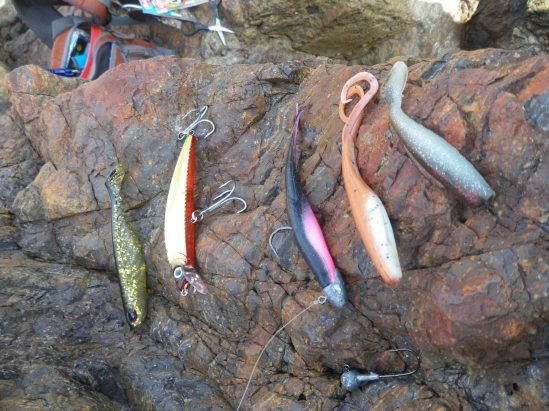 Tried everything in the tackle bag

In the afternoon I decided to drive back to Brisbane, via Baffle Creek. I arrived at the Flat Rock boat ramp, just after lunch, at the top of the incoming tide. The wind was still a strong southerly and the rock bars to the east of the boat ramp were all covered in at least 30 cm of water. This area took a pummeling from the flooding, earlier in the year and there was plenty of evidence, with grass and debris still high up, in the mangroves. The ramp and picnic area were badly damaged but have now been repaired.

I waded out on the biggest rock bar just west of the picnic area and cast around the edges. The tide turned and started to run out just after 1.00 pm. There are big rock bars on either side of this channel. They form a funnel in the middle and on a big tide the water really races through. The water was quite clean at high tide, but got dirtier and dirtier as it ran out.

I started with GULP and Zman soft plastic on 1/6th oz, 1/0 jigheads. I had a few bites and watch the bait fish follow the lures in. Across from me on the other side of the channel, something was feeding in the eddies, formed by the opposite rock bar. I tried to land a few long casts in the right spot but I could not tempt them.

After about an hour, I move back upstream to the west of the boat ramp and cast around in the shallows. I was now fishing with my all-time favourite plastic, the humble 4 “ GULP Minnow in the Pearl Watermelon colour, on a 1/8th oz, 1 jighead. I was now down to 8lb leader, in the hopes of attracting a fish. After a few casts I did. It was a small dusky flathead. I continued along the sandy banks, casting at the base of the mangroves and soon found some more. I caught six in the next hour, but only two would have been just over 40 cm.

View from the rockbar 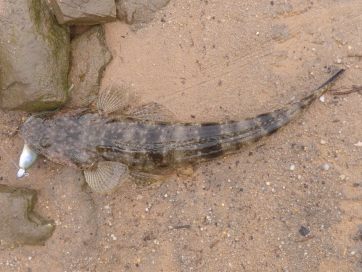 This seemed to be the common size in the creeks

In a month the bigger flathead will be everywhere

The flathead were small but there were plenty of them

At about 3.00pm it was time to pack up. Overall, I had had a pretty disappointing couple of weeks on the fishing front. The fish had been small and hard to find. However, I had enjoyed exploring some new territory and as always, learning what does not work can be as important as learning what does. I found that when the going gets tough small, natural coloured soft plastics, like the GULP 4/3″ Minnows and light leaders, still produce results. The Zman Minnowz did not produce a fish on this trip – and they had plenty of outings. I will have to try their natural coloured minnow shaped range, but I still think the GULP scent and softer texture give their lures the edge. The weather had made things very hard but I believe the big flush out will set the area up for some great fishing in late winter. I am planning to get back up here as soon as I can.