Sunday had been a disappointment I had fished for three hours and caught nothing. Had my fishing mojo deserted me? There was only one way to find out – get straight back out there. So, on Monday, I was up early, to beat the forecast building south-westerly winds.
I decided to head for Bongaree on Bribie. I would go back to a familiar spot where I felt confident that I would catch something. I was heading for the freshwater drain in front of the seaside museum.

It would be low tide at 6.28 am and at this stage there was no wind. I arrived at about 5.45 am. I put on my waders and walked out in front of the drain down to within a couple of metres of the drop off into the main channel. After a disappointing day on Sunday, I decided to fish very light with 8lb fluorocarbon leader. I chose to stick with natural coloured small soft plastic lures. These were most likely to tempt the bream.

I cast into the running tide and hopped the lure along the bottom back towards me. At about 6.20 am I broke my duck with a decent bream, about 30cm long. About 15 minutes later, I caught another – a little smaller. Then things went quiet.

The cormorants and the dolphins like to fish in this area which suggests there are plenty of bait fish around but I could not see them in the water. I swapped through a few soft plastics and tried a small hard body vibe lure for a while.

By about 7.00 am I was back with the 3” GULP Minnow in the banana prawn colour. In an effort to get something going I was leaving the lure on the bottom for as long as possible between rod lifts. This can sometimes entice bored fish to strike. It did the trick and the rod bent over and something powerful took 3 metres of line and disappeared under the ledge.

I presumed it was a cod by the tactics. Brute force was not going to pull it out, I only had my light rod and 12lb leader. I tried a few angles but there was no movement. I decided my only option was to loosen the drag and see if it swam out. This requires the patience of a saint. You cannot put the tension back on until you are sure the fish is clear of the overhang. I waited about two minutes and then the line very slowly started to float out and away on the current. I waded along with it for about another 20 seconds then tightened the drag and pulled the fish over the ledge and slowly back to the beach. 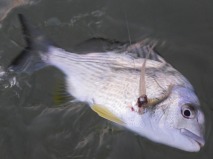 Back in business with the GULP Minnow

The jetty has been producing plenty of fish lately 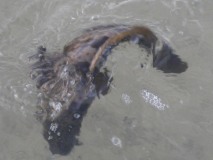 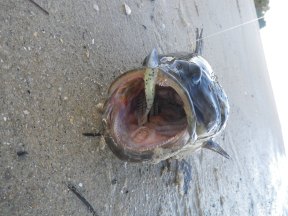 I would not want to be a baitfish 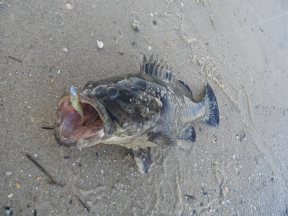 It was a nice estuary cod – it measured up at 49cm and proved how good these fish are at ambush attacks. I decided it had earned its freedom and released it after a few pictures. The wind was up and although it had not been an easy session I had caught fish – so I went home happy.