On Thursday, I found myself with time off for a few days. I was in Central Queensland and decided to drive out to Byfield National Park, just north of Yeppoon. I stayed at the Rainforest Ranch Cabins in Byfield (which are very comfortable, but more focused on providing a romantic getaway than fish filleting facilities) and intended to drive over the sand hills, to fish in Corio Bay, as I have done before.

I was up early and reached the foot of the big sand hill that leads over to Nine Mile Beach, at about 6.15 am. I lowered my tyre pressures to about 22 PSI and put the FJ Cruiser into low range. Last time it had floated up this hill – but that was after months of rain. This time it was like wading through treacle. The sand was soft and dry and the track had no doubt been torn up by previous drivers, who had found it as tough as I had. I tried three times and stopped when I started to sink and rolled back down to try again. After three attempts I gave up. I was on my own and I was concerned I would get stuck and not be able to simply roll back down. I need a bit more practice at this sort of thing.

I turned around and looked at my options. It was now just about low tide. I decided to drive back through Byfield and towards Yeppoon. I would go to the end of Fishing Creek and walk down it, towards Corio Bay, fishing in the pools and mangrove lined channels. This spot had produced a few fish for me in the past but it looked like it had potential for far better things.

By the time I got going it was about 8.30 am. Low tide was about 7.30 am in Yeppoon, so I assumed it would be about 1.5 hours later, this far up Fishing Creek. The moon was a somewhere between new and full and it was not a particularly big tide. It was hot – already about 28 degrees. It was still but a northerly wind was forecast to pick up later in the morning.

I was fishing light – 2.8 kg Fireline and a 10lb fluorocarbon leader, Loomis GL2 Fast Action spin rod and Shimano Stella 2500 reel. I started with small soft plastics in natural colours on a 1/8th ounce, size 1 hook jighead. The locals had recommended the GULP 2” Shrimp and 3” Minnow, in the Banana Prawn colour, for flathead and grunter bream.

I waded through the shallows and paused to cast wherever there looked like there was a bit of a hole or drain. There were plenty of schools of small mullet (or perhaps blue salmon) cruising the shallows. I was hoping the bigger predators had followed them up the creek.

I passed plenty of flathead lies on the exposed sand banks, but most looked like the fish would have been under the legal size. My first fish of the day was a tiny flathead that was sitting a metre from the bank, in about 15 cm of water. It was now just after 9.00 am and I expect we were nearly at low tide, as the water was slowing. 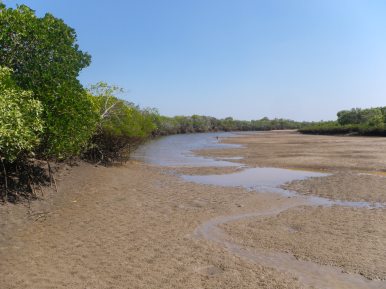 The fish were here somewhere 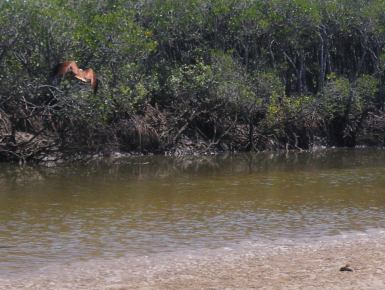 But it came back again 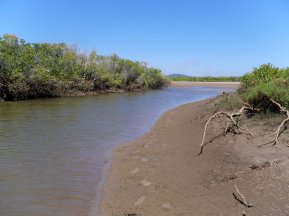 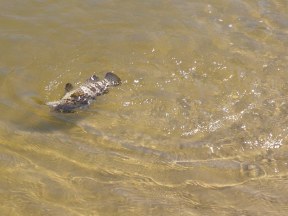 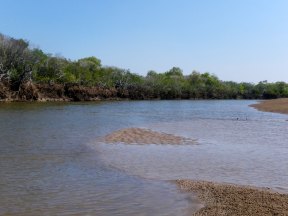 The edge of the sandbank looked good 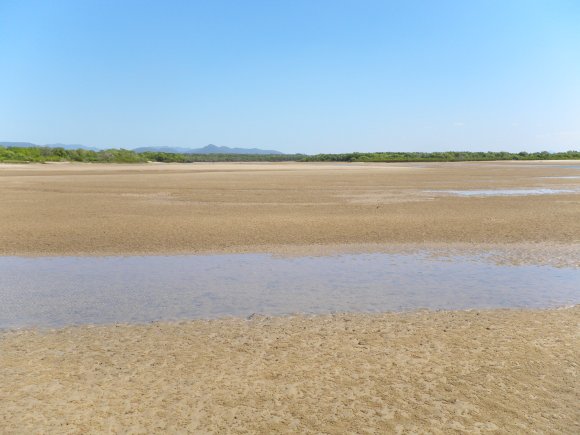 The tide moves out pretty quickly

I found a slightly deeper channel, on a mangrove lined bend and concentrated on putting my casts in close to the mangrove roots. I lost plenty of jigheads to the trees and roots – but that’s where the fish live so if you are not pretty close, you will not catch them. I had some solid bites and caught another small flathead. At about 9.30 am something grabbed the GULP 2” Shrimp soft plastic and dragged it down into the roots. I could not pull it out so I let the drag off and eventually it swam out and I pulled it up on to the sandbank. It was an estuary cod, but only a small one. I let it go but as it swam away another predator – an eagle, swooped down and grabbed it. It did not have a good grip and dropped it on the sand. It soon swooped for another attempt and this time it was successful. It disappeared into the mangroves to eat its breakfast.

I continued along the creek and caught several more cod, the largest of which would have been just over 40 cm long. At about 11.00 am the tide turned in and I decided I had better head back to the car. I was delighted to be catching fish, even if they were small. I decided to try and get back here a little closer the high tide next time.