With massive downpours all along the Sunshine Coast on Friday, Saturday and Sunday, I was concerned that the recent flathead bonanza might come to an end. On Monday, I found myself driving up to Bribie to see how the big flush of freshwater had affected things.

I have been doing well fishing the last few hours of the run out tide, over the last few weeks. But after a major rain event this is not ideal. The water is at its freshest and cloudiest in the estuaries, as the tide runs out. All of the water that is running off the surrounding land changes the salt levels quite dramatically and this can force the fish or what they are eating, out to sea.

The trouble is the best drains and hiding spots around Bribie are hard to reach at high tide. So even though the incoming tide makes the water saltier and more comfortable for the fish, you cannot get at them from the shore.

I decided to fish as close as I could to the mouth of the Passage, next to the green channel marker, on the mainland side. This involved a long walk from the Bribie Bridge. I arrived at the sand spit, beside the channel marker at about 1.30 pm. Low tide would be at 4.00 pm. It would be a very low low tide at 0.3m, as we were only a couple of days off the new moon.

I tried a few GULP soft plastics – the 4” Minnow in Pearl Watermelon and the 2” Shrimp in the Banana Prawn colour, with no luck. The water was running out quickly, but it was very dirty. I swapped to a 5” Powerbait Minnow in the Pumpkinseed colour and started casting close to the green channel marker pole. This worked and just before 2 pm, I got my first flathead of the day. It was a decent 55cm fish.

I slowly moved back towards the bridge, casting into the run out tide and following the fringing weed beds. It took almost an hour to find the next fish. By this time, I had swapped to a GULP 4” Minnow in the Smelt colour. It was another flathead, just over 40cm.

As the tide ran out, the fishing got harder and harder and the water got dirtier and dirtier. I dropped another fish, closer to the old oyster jetty but, by low tide I had really only had three serious bites in 3 hours.

Finally, I picked up a few tiny (under 30cm) flathead near the bridge, but overall it was a disappointing session. It is too soon to say that the fish are gone for good. I suspect that if there is no more rain, we may well see them build up again after the new moon. 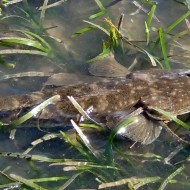 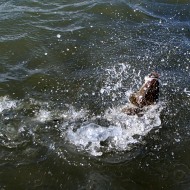