A strong south easterly would bring more showers on Wednesday and low tide at Bribie was not until noon. New moon would be in three days time. I drove up and started fishing to the south of the bridge, at about 11.00 am.

I caught a couple of legal flathead on the Japanese Ikajako 3 ½ inch Powerworm. I then got a shock as a Pied Cormorant surfaced right next to me. Normally when this happens they are as surprised as I am and they swim off pretty quickly.  But this one was not in the least bit startled. It was looking hungrily at the soft plastic on the end of my rod. Each time I cast, it lunged off after the soft plastic.

I swapped to a 5” Powerbait Rippleshad soft plastic. The cormorant got hold of the plastic but I managed to pull it free. I cast it out and after a few hops I connected with a fish. As I wound it in, the cormorant started chasing it around. The fish was a 50 cm long and looked far too big for the cormorant, but it swam around pecking at it. I won the fight and released the fish.

I swapped to a Gulp Jerkshad in the Pink Shine colour. The cormorant kept swimming around close by and kept trying to grab the soft plastic. Each time I caught a fish it would try to grab it. This and the wind was making the fishing pretty hard. I caught a smaller flathead – about 35cm long and the cormorant grabbed it, as it surfaced. It wriggled free, but then the bird grabbed it again and this time it pulled the fish off the jighead. It swam off towards the shallows with the flathead secured in its beak. It was now out of the picture while it figured out how to swallow the fish.

South of the bridge – low tide 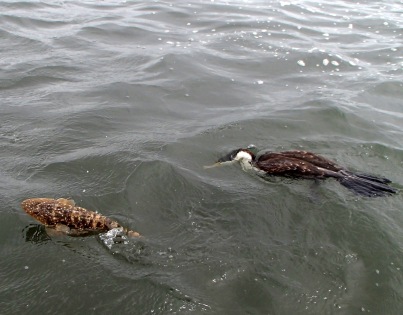 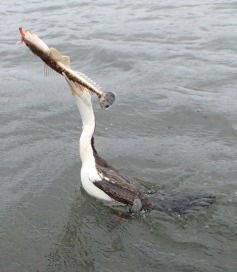 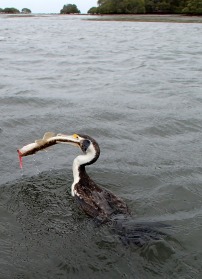 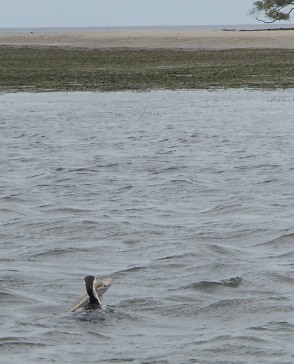 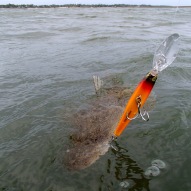 I swapped to a Lucky Craft Pointer X D 75 hard bodied minnow in the Disco colour. I typically use this when fishing for barramundi up north but I thought I would try it on the flathead. It is a suspending lure and the X D stands for extra deep – so it would bump along the sandy bottom. It did the trick and as soon as I found a patch of sandy bottom a flathead grabbed it. I unhooked and released the fish and caught another, a few casts later. This one had really slammed the lure and broken off one of the trebles. I carried on fishing with just the rear treble and caught a few more flathead 40 – 50 cm flathead over the next half an hour.

At about 1.30pm, I finished the session by catching a couple more flathead on the 3 “ Powerbait Rippleshad in the Perch colour with a red paddletail. The fish were plentiful and only the wind and the wildlife had slowed me down.