It was another mild morning in Iluka. A light northerly wind was doing its best to flatten the sea. I decided to fish Middle Bluff again and see if I could find a legal sized mulloway (jewfish).

At this point I will say my piece about the raising of the jewfish size limit in NSW. I have read a bit about the surveys that were done to determine whether or not the existing limit of 45 cm, was adequate to protect the species. They were very small surveys that relied on a lot of subjective judgments by local fisherman and fisheries officers, but it would have been financially impossible for them to be developed any other way. After putting together these surveys, NSW fisheries concluded that fish at 45cm were not having a chance to reproduce before being caught, so they have raised the legal size to 70 cm and set a bag limit of two. Commercial fishermen also have to obey by the new rules, although they are allowed to keep some smaller fish, under by catch rules. If I have got any of this factually wrong, please comment and correct me.

If we want sustainable fish stocks we need to carry out credible scientific research. Our duplicated state fisheries departments do not need any more boats, trailers, life jackets, uniforms or rulebooks. They need scientists and scientific rigour in their research processes. The science used to support this decision may be proved right but I would have liked to see much more comprehensive studies. We now have the ridiculous situation where on one side of the Tweed River the Mulloway size limit is 70cm and on the other, it is 75cm.

It was another spectacular sunrise at Middle Bluff. I decided to fish with the light rig from the beginning and stick to the soft plastics. I was using 16lb fluorocarbon leader and a ¼ ounce, size 1/0 hook Nitro jighead. I loaded up with a GULP 4” Minnow in the new Green Camo colour.

The sun came over the horizon at about 5.30am and by 5.45am, I had my first fish. It was another mulloway/ jewfish, but it would not be dinner because it was only about 45cm long. I unhooked it in a rock pool and took a few pictures, then speared it back down in to the wash. It had grabbed the plastic very close to the rocks again.

I put in plenty of casts but could not get another. I swapped down to a lighter 10lb fluorocarbon leader and put on a GULP 2” Shrimp, also in the Green Camo colour. I moved a little further north along the rocks and cast down into the wash. I let the soft plastic waft around, but I left it too long and got snagged. I re-rigged and put it back in the same spot. After a couple of casts I felt a solid hit and the rod bent over. Fortunately, the swell was light and I was able to get down quite close to the water. I let the fish take some line then tightened the drag a little and lifted it up, onto the rocks with the help of a wave. It was a very solid 37cm bream. So I would have something for dinner. 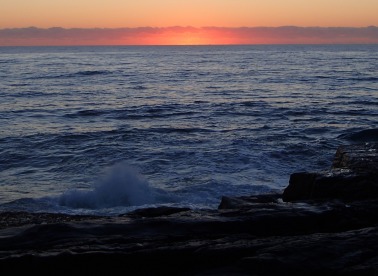 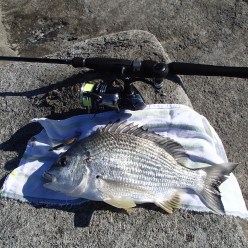 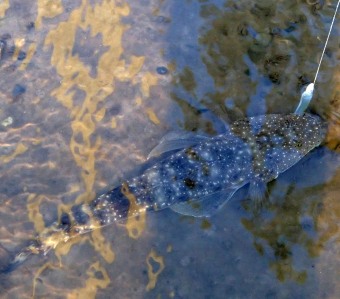 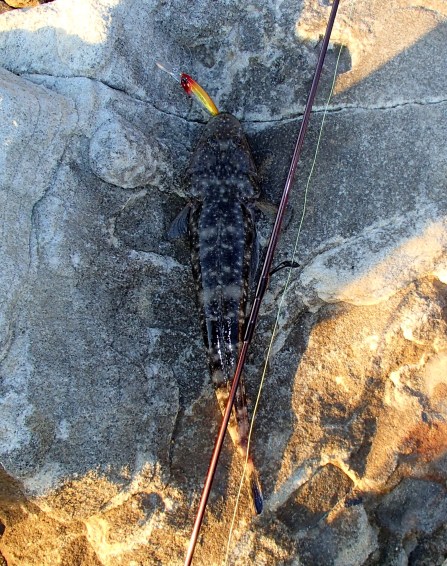 Plenty of small flathead in the Clarence River 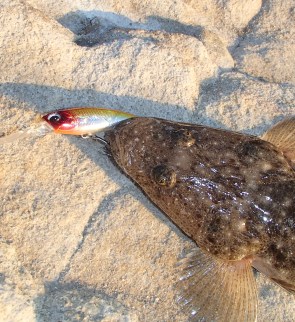 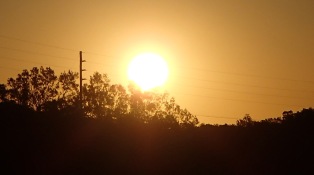 I fished on for another hour but the wind picked up and the tide started in, making fishing a bit hard. At about 9.00 am, I cleaned up the bream and walked back along the beach to the car.

On Sunday afternoon I decided to wade out on the stretch of the Clarence River – just in front of the Anchorage Holiday Park. There are sand banks and weed beds and it looks like an ideal flathead spot. I started just before 5.00 pm. The tide was running out and I waded across the sandy and muddy bottom until I came to the weed banks that fringe the deeper main river channel. As I was exploring, I started by fishing with a soft plastic that I am very confident using – the GULP 4” Minnow in the Pearl Watermelon colour. I was fishing with my estuary light spin rod, 10lb fluorocarbon leader and 1/8th ounce, size 1 hook jighead.

It did not take long to find the fish. I caught a couple of small flathead first and then a legal one (40cm), that was sitting in a sandy hollow. I waded up river and decided to switch to a DUO Realis Shad 59 MR hard bodied lure. This is a medium diving lure and the flathead and bream love it. As the sun set, I caught a couple more small flathead on this lure.

I had fished at dawn and dusk and caught fish at both sessions – and had a nice bream for dinner – living the dream!