On Monday afternoon, the south easterly wind was blowing hard and the beaches south of 1770 were impossible to fish. I decided to fish on the northern side of the 1770 headland, in Round Hill Creek. I drove to the car park by Captain Cooks Monument and followed the path down to the creek.

1770 is one of the few places you can actually see great sunrises and sunsets. I started fishing with small soft plastics at about 4.00 pm. I moved along the shoreline towards the mouth of the creek. At one point a small school of what looked like trevally came by, busting up into some bait on the surface. As is so often the case, they remained just out of casting range.

The shoreline is rocky, interspersed with patches of sandy bottom. As with everywhere in this town it looks very fishy! I swapped to a slightly bigger 4” GULP Minnow in the Pearl Watermelon colour. As I pulled this carefully over the top of the submerged rocks a small cod shot out and grabbed it. It did its best to bury itself in the rocks but I just let the pressure off and waited for it to swim out. It was about 30 cm long – so I sent it on its way. 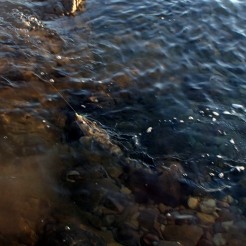 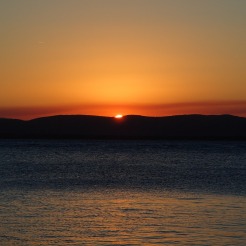 I swapped to a bigger soft plastic a GULP Crazylegs Jerkshad in the Lime Tiger colour. I was still fishing with my light rig – 10lb fluorocarbon leader and a 1/8th, 1/0 jighead. After a few casts, I felt a solid bite at the foot of the rocks and was sure I had a fish on for a few seconds. But it must have dropped the soft plastic. I carried on along the shore and turned back as the sun began to drop towards the horizon. I stopped where I had felt the bite previously and put in another cast. I slowed it all down and let the plastic sit on the bottom for a good 10 seconds. I then hopped it back towards the shore. On the third attempt the fish hit the plastic hard.  It hooked itself and started thrashing around in the fairly shallow water. I let it make a few runs then tightened the drag and pulled it up on to the pebbly beach. It was another flathead – but a dusky this time. It was a little bigger the mornings version at about 55 cm. By the time I had photographed and released it, I had a violent red sunset to watch.