It was my last day in 1770 for a while. I decided to fish the afternoon low tide at Wreck Rock. It was full moon so the water would get quite shallow around the rocks. There was a fairly light north easterly wind and not much swell.

I arrived at about 3.00 pm and rigged up with a 16lb fluorocarbon leader and 3 “ GULP Minnow on a 1/6th ounce, 1/0 hook jighead. This produced a small dart on the first cast and almost a fish a cast thereafter, for the next 30 minutes. I gradually moved along the rocks and it was usually the first cast, in a new location that produced the bigger dart. I soon had a few worth keeping.

By about 3.30 pm I had almost arrived at the end of the rocks. I had now swapped to a Zman 4” Jerkshad in the Shiner colour. A cast it out, about 5 metres directly in front of the rocks and the lure fluttered towards the bottom. I set the hook on another dart. Dart fight hard and love to turn sideways like trevally, but this one was positively hyperactive. I pulled it clear of the water and then released it. The next cast produced another dart, a little smaller but equally frantic. Then I saw why the fish were so spooked. I long, slow moving grey shape swam along the base of the rocks. It looked about 1.5 metres long and had clear black markings on its fin – so I presume it was a black tipped reef shark. This probably explains numerous bite offs I have had around these rocks.

The dart kept coming but as the tide turned in I caught a few small trevally – including  a strange looking bumpnose trevally. As the tide started to run in at about 5.00 pm,  I decided to swap locations.

Worth eating one this size 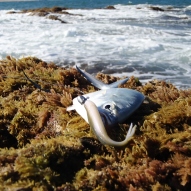 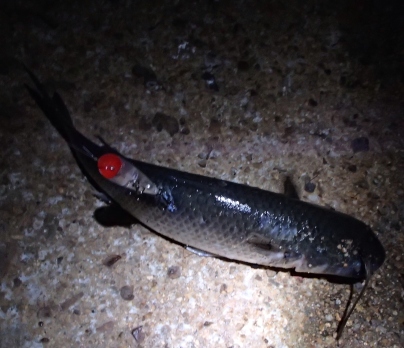 I drove down to Deepwater Creek to fish through dusk. I thought the big tide and full moon might create some good conditions. I arrived about 5.30 pm and fished through the dusk with poppers and small soft plastics on a 10lb fluorocarbon leader. I tried both the freshwater and saltwater sections. I was surprised to get a catfish from the salt water side. It grabbed a GULP Swimmow soft plastic in the Peppered Prawn colour, presented on a 1/16th, size 1 jighead. Meanwhile as the sun dropped below the horizon something swiped at the popper on the freshwater side. On the saltwater side, in the pitch dark, I could hear plenty of surface slurps and bust ups. The moon was not up yet and as I dragged the popper slowly across the surface, it was getting bumped and nudged all the way through the retrieve. Finally I hooked something and it pulled quite hard. I turned the headlamp on to reveal a small mullet. There was a big school of them cruising round.

I gave up for the night and marked this spot down for a future visit. Once again, I would like to recommend Gavin and Kim of 1770 Beach Accommodation. I stayed at Loka Santi which are very smart apartments, but they have accommodation to rent at every budget level and can offer some really great rates – visit their website for more information  www.1770beachaccommodation.com.au